OBX Cycling: Bike trippin’ – As good as it gets

Two lines of cars waited in formation, and we tucked our bicycles behind a Hummer and in the lee of a cement truck that partially blocked 30 knot winds from the south.  A Hatteras Island Ferry official approached wearing a jacket with the words ‘Security’ and asked us for ID’s.   Satisfied after comparing faces to driver licenses he then asked if we were aware of the winds.

Happy to oblige, I responded yes, to the south with gusts to 35 and we’re riding to Okracoke to which he smiled, nodded and waved us onto the Ferry without a word, eyes rolling implying we had no idea what lay ahead.   Aboard the Ferry, we stood with our bicycles and I held onto a post with crosswind gusts that made footing unstable.   With 23 cars, 1 cement truck and 2 bicycles on board, we set oursights on the southern side of the Hatteras Inlet, and the ride to Ocracoke.

A pickup truck filled with construction supplies was parked to starboard, next to our bicycles just far enough away from the noisy cement truck.  Have you ever ridden the Ferry before, the man in his early 40’s asked, and no we hadn’t, and he explained we would be on the boat for an hour especially with the headwinds and would then dock on the northern tip of the island.  That’s how we met William, an Ocracoke native, born and raised he said, and no, hurricanes do not bother him and he went on about how sometimes there is just too much weather information.   Noticing our panniers and robust-build touring bikes he asked where we were planning to ride, and when I said Ocracoke he responded that we would have 15 miles of headwinds, and I nodded.  Everyone was aware of the winds.

You can always turn back if you don’t make it to Ocracoke, William offered, and I nodded to be polite and said confidently that we would indeed make it to Ocracoke.   The first half would be wide open William said, but there would be road stops for parking to view the wild ponies in case we needed a break, and if we made it to the second half, the first few miles would have tree cover and then it would open up to the winds again.  I focused on the important details and asked if he had any suggestions for lunch, and we spent the next five minutes reviewing his favorites on the menu at Jason’s, the only restaurant open in Ocracoke during the off season.

By 10AM we reached the Ferry Dock on Ocracoke Island, and all cars and 1 cement truck filed out of the boat while we waited for the Ferry boys to wave us through.   As we departed the Ferry, several Ferry workers informed us about the winds, and yes, I said we knew, and then one said that at least we wouldn’t have any traffic, and I realized at that moment how we were about to have 13+ miles of roads to ourselves – until we reached the city limits of Ocracoke.  There was absolutely no human, no building, no structure, just raw nature and wild ponies this entire stretch of the island.

With 30 knots of headwinds and heavy touring bikes I figured it could take us up to 2 hours to reach our southern destination.     What I hadn’t figured was the blowing sand that made it’s way deep into the respiratory system, and having to ride with head low and eyes practically shut.  Of course we had the entire roadway to ourselves, so if we meandered well out into a lane, or even crossed over to the oncoming traffic lane, none of that mattered because there wasn’t any traffic.

After an hour of hard pedaling into a sandstorm, Paddy, on his electric bike, suggested that he give me a tow, and my first response was absolutely not, no bike purist would accept a tow in a sandstorm.  So we continued on for another 10 minutes until a whallop of sand went down my throat and I agreed to a temporary-tow, just a short one I insisted, one just long enough to ride-out the sandstorm.

Paddy tied a small line to the back of his bike rack and I held the line in my hand — in case I needed to let go at any moment — and sure enough as long as I kept pedaling and hung onto the line,  there was just enough of a tow to get thru one final mile of drifting sand.

The terrain on Ocracoke Island’s National Seashore goes like this:   3 miles of wide open narrow stretches of land with high sand dunes covered in vegetation and not a lot of blowing sand, followed by 4 miles of tall dunes without vegetation with sand drifts covering the road, flying waves of sand that stings any exposed skin making it hard to breathe, followed by 3 miles of tall evergreens on either side of the road making the wind almost bearable followed by the last 4 miles of wide open terrain with a bike path and even though the winds are relentless at this point and your quads have quit long ago, at least you know that you’re in reach of lunch at Jason’s.

Flounder was the Fresh Catch at Jason’s, and we inhaled a flounder sandwich only occasionally making note of the thick, tender white meat that was truly a treat worth riding a bike through a sandstorm.  By the time we wrapped up lunch, it seemed that we would not make the 1:30 Ferry departure.

As good as it gets 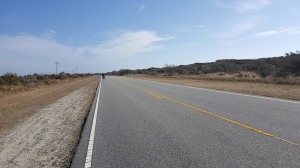 I suggested that we stop at the signs for spotting wild ponies as we would have time to spare before the 2:30 Ferry, and off we went riding casually, enjoying a well deserved tailwind, until I may have mentioned something like, hey, it’s possible we could make the 1:30 Ferry if we pedaled-to-the-metal assisted by this tailwind, and I may have not waited for a response, when shifting this slow touring bike into kick-ass gear.   Paddy was right there with me, sporting a bike computer and when he said we had reached 20mph, I knew that we needed to be closer to 30.   Without letting that Fresh Catch digest even a little bit, we were two bicyclists off on a road race, taking advantage of a monster tailwind with the entire island to ourselves, on a mission to make the 1:30pm Ferry and only if our heavy bikes and loaded panniers could maintain 26mph for the next 13 miles.

For the first 4 miles, wind pushed us along a bike path, the next 3 miles in the protected forest, followed by 4 miles in the sandstorm zone and the miles ticked by.  Just because you are riding with a tailwind, the sand still gets into your mouth, but approaching 30 mph was far more exciting than not being able to breathe.  Then, we hit the sand drifts. I opted to take my drift at reduced speeds (in the lower 20s) and the moment my front tire hit the deep sand my bike slowed, wobbled like a noodle and I should have gone down, but by some miracle, my bike managed to stay upright, and I looked over at Paddy, and he was still up too, and we both let out a whoop because who knew one could bike through a sand drift without crashing, and we returned to near-30-mph for the final 3 miles to the Ferry dock.   Making the 1:30pm Ferry departure with minutes to spare, we high-fived with boat workers and decided that riding  close to 30 mph on an empty island with a tailwind, spinning out into sand drifts and managing to stay upright is about as good as it gets.

More on bicycling the Outer Banks during the off-season:
5 reasons to bike Corolla NC in February
Objects appear fuzzy
The Yellow Brick Road
OBX Turn-by-turn
As good as it gets