More adventures filled day 4 of bike trippin’ along the Outer Banks in off season.   We continued to ride without paper maps or GPS guidance to decide where to ride – opting for more of a ‘get lost’ strategy.   It’s very easy to ride the Outer Banks without a map:

It’s possible it was my idea to bike up the sidewalks to the Wright Brothers Monument at the top of one very large dune.   From a distance, it looked like an overgrown anthill, and off we went for a ride up this anthill that took every last gasp of air.  Refusing to dismount before reaching the top, clearly we have been enjoying too many days of riding flat terrain.    Reaching the top of the Wright Bros Monument gave a clear view of the barrier island, and from there we decided to ride to Manteo.

From Manteo, we saw signs for the North Carolina Aquarium, and decided to head in that direction.    We arrived into an empty parking lot, and cautiously rode toward the ticket booth, that was also empty.   One gate was open and we stared for awhile, trying to decide if the place was open or closed, when suddenly a man with a long pole with bait at the end came running out and explained yes indeed the aquarium was open, he said we could leave our bicycles anywhere, and pointed out several spots to park the bikes, not seeming to be in any hurry at all, and when we opted to park by the angle fish sculpture, he said he would see us soon but had to go back inside to finish feeding the creatures.

So inside we went, and enjoyed the Manteo Aquarium almost completely to ourselves — along with of the sea creatures who had permanent residence. 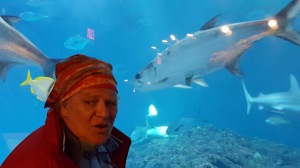 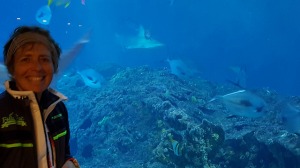 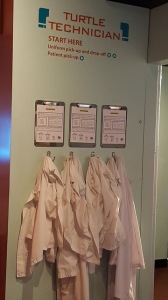 More on bicycling the Outer Banks during the off-season:
5 reasons to bike Corolla NC in February
Objects appear fuzzy
The Yellow Brick Road
OBX Turn-by-turn
As good as it gets