Well, what do you think of where I am now. It sure was some experience coming here though. I saw a lot of stuff. If I could write every detail as I saw it I could probably write a book, but there’s a lot you can’t write, and eventually I’ll probably forget some of the interesting highlights.

Anyway, on the way here, I was separated from my baggage — the only clothes I had were those I wore. Naturally, that was the time for me to meet with an accident. Sure!! I split the seam in the seat of my trousers and could do nothing about it. It was that way for days, and every guy who watched me walk away sure did his duty in calling the fact to my attention.

Now, I have my hair cut so short that there really is nothing there.

Of course, I’m picking up a few things in French. I really wish that I had studied it. A lot of our fellows speak it like a native. But, I’m also surprised at the number of people who speak some English or speak it well. I noticed this especially in Paris. Yes, I’ve seen it, and in a lot of the shops, they speak English. It is certainly a beautiful city and has hardly been maimed by the war.

I walked down the Champs Elysees, saw the Arc de Triumph, Notre Dame, Chamber of Deputies, Napoleon’s Tomb and many other places. I also dropped into the IBM office, and they told me that it has been operating all during the war.

Taxis are either bicycle or horse drawn carts, all sizes and shapes, and usually haul one person. Some of the bicycle type look like miniature auto coupes, others are open.

It was interesting enough so that I hope I can go there for another day.

Mildred says you got some Nescafe for the package which she says is on the way. Thanks!

So long for now. 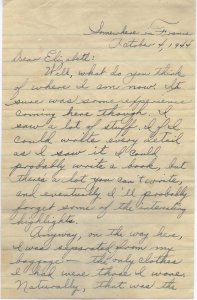 1944 Letters, From France, Written to Elizabeth