I have received the pictures — about 5 or 6 different letters. Don’t send any more though, because I should have liked to have had them while I was in ___. So hold back for a while.

As for Christmas package – I’ll tell you how I feel about. First, I appreciate the sentiment behind it. I can keep myself pretty well supplied with necessities from the PX — like shaving stuff, soap, blades, washrags, towels, candy etc — at least for some time in the future.

What I do appreciate as much as anything right now are those rolls of film that you may be able to send from time to time. I think there’s a new postal ruling that we G.I.s must request specifically just what we want or the postal authorities won’t accept a package. I request the film – ANY AMOUNT. That ougth to satisfy them.

Your last package arrived OK — that is, with chocolate, dark stuff, gum, candy etc. that will be enough to last for awhile. Besides, I’d like for the rest of the packages to catch up so I can keep some.

Now, I intend to send a package home as soon as I get all the stuff I want to put into it. Then I’ll send it to some one of you to distribute to all.

With me, and I get too much on hand, I can’t always take it with me.

I’ve visited Paris and it is certainly a beautiful city. Saw such famous places as the Arc de Triumph, Notre Dame, Eiffel Tower, Napolean’s Tomb, Chamber of Deputies; walked the Champe Elysees, which is the world famous street. Never imagined that I would one day do that.

Anyway, alot of stuff has happened. Everything is out of doors now. A fellow down at the outdoor latrine that we now use remarked that he had defecated in better places but never had the beautiful view to go with it. With that I guess I’ll close.

P.S. No magazines yet. Hand cream is damn good. 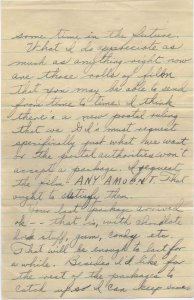 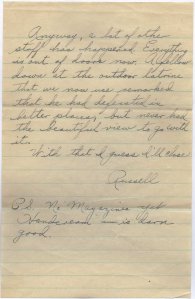 1944 Letters, From France, Housed by English Civilians, Written to Willard-Grace