Well, I guess the best way to start this letter is to tell you that you can certainly anticipate my needs to a “T”. I had a hunch all along that you would probably return the money I sent, doggonit…Anyway, I want to thank you for your thoughtfulness..

I certainly glad to see your paragraph on getting film too. PLEASE get me six (6) rolls of film, size 828, and if at all possible I would like SUPER XX… Of course, I’ll take anything I can get. If and when you do obtain this film, I would appreciate your sending to me by first class mail. Send it alone.

Thanks also for the clippings which you sent showing the snow back there. I had just asked you in a letter the other day to send some to me if they could be found. I had one that was sent to me by John, my red-headed friend over here, but I don’t know where the picture was taken. Anyway, it showed some street with only the roofs of cars sticking out of it, and I don’t believe I ever saw that much snow back there…not since I was a kid anyway, as I remember it used to come almost to the tops of fences at one time. It seems that our winter is about over, over here.

You should see the sleeping bags we now have. They cover up everything including the top of your head, leaving only the opening for your face. I might mention that they have a big zipper on them and you can pull this up to suit yourself. But I can’t get used to having something around my head. I’m zipped right up from head to foot and feel like a snail, as I can stick my head out every once in a while and a tentacle-like hand moves out every once in a while as well. We get into one of the things and feel like a bunch of mummies or a bunch of seals.

As regards to my French, though….There’s only one way to really learn it and that is to get out and talk to people. Therefore whenever I go out, I always take the dictionary with me, so that when I get stuck for a word, all I do is look for it in there, show it to the French and have them pronounce it for me and try to remember the pronunciation. I have made progress, but I cannot measure my progress until I go out with someone who does not or has not made an attempt to speak French. Then I feel fluent in comparison. You take words in English that end in TION, change the pronunciation a little, and you have a French word. The same is true of many of our words that end in ABLE or IBLE. So once I get a working knowledge of the verbs, my progress will be a lot better. It’s surprising how, if you twist the pronunciation of some of their words, you can draw out a diminutive of the English word (Boy, is my typing lousy tonight). It really helps one’s vocabulary to know French due to the similarity of many of its words with English.

I have both the addresses of Jack and Don now. Did you forward my last letter on to Jack? I sent it in one to Romayne.

During the past week, we have had fried eggs and oranges for a change. A fried egg is just about as popular as an ice cream cone to me, and to everyone else as well. I had four this morning, getting two in my first trip down the line and going back for seconds. Have also had oranges during the same period. Boy it sure seems good to get something fresh like that.

Guess I’ve run out of stuff for now, so will close and go see the movie we’re having here tonight. 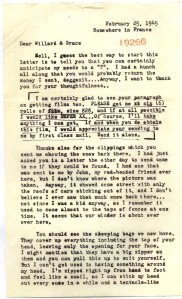 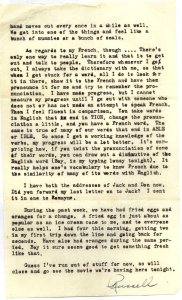 1945 Letters, From France, Written to Willard-Grace