Now I’m back at my home station again and have to resume my writing activities again and I’m really behind as these are the first that I’ve written since I’ve returned which is a week tomorrow. It takes time to get around to it now. There are quite a few activities to take up one’s time here now and I hope it stays that way. In a way the waiting from here on in may be harder than during the war itself. It’ll probably be a long time before I make it since I have only 63 points and they’re only dipping into the 90s here now.

But I had a good time while on my furlough as most everyone does. I had nine days in England and the whole thing was wonderfully organized. I arrived at my destination – Manchester – about 9 hours after I got off the boat at Southampton. As soon as we got off there was a train waiting to take us to London. From London everyone begins to shift for himself. Some go to Scotland, some to Wales, etc. From Manchester I went down into Wales and it was beautiful. The northern part of Wales is very mountainous and it was the more beautiful because the weather was perfect. Also the fact that the finish of the war was imminent helped in making everything very pleasant. One of my first surprises there was having ham and eggs for breakfast. Delicious and first I’ve had in a long time.

The official word of the Jap surrender did not come until the last day of my furlough, so I didn’t do much in the way of celebrating there. But I watched some of which consisted of impromptu parades, buses and streetcars running around with multi-colored lights glowing. Of course some people were glowing too, but that’s about all because they couldn’t get much to drink.

I went back to London that night and the following afternoon I was in Southampton and the following morning we boarded the “Exchequer” and headed across the channel. It was an American boat and we had some delicious ham for dinner on the way across. A couple of huge floating mines were sighted and the gun crew fired on them in an attempt to destroy them but they were too far away to hit, so maybe they’re still out there.

Guess I’ll close off for now, as I have to shave for dinner. 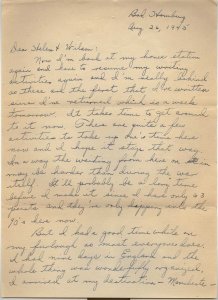 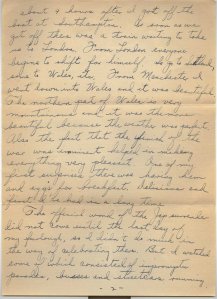 1945 Letters, From England, From Germany, From Wales, Written to Wilson-Helen