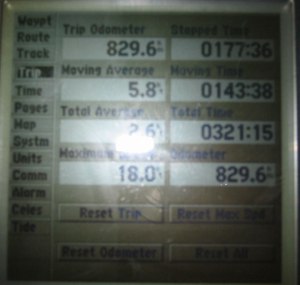 Norfolk VA and offshore
Pat calls around noon. Cat Maudy’s current position is the mouth of the Rhappannock River, with following seas growing to 6-7 feet….and rollers coming in around 10 feet. The GPS showed they were sailing at 18 knots. A line had become loose over the starboard beam, and became entangled with “something” under the hull. Captain Pat was concerned it would wrap around the prop or the rudder, and wanted my feedback. Should he dive under the hull to free the line. Hello??

That would be a firm NEGATORY Captain Pat. There will be NO diving under the hulls while sailing 18 knots in 6-7 foot seas. He would have to WAIT, until the sea state calmed before the line issue could be resolved. I found it hard to imagine that anyone would consider diving under a boat in these conditions to retrieve a line, but then again, I’m an extreme athlete (i.e. not known to always fully engage the brain) – so it is best not to be too judgmental.

Pat calls again around 4:30pm…the crew had safely arrived in Norfolk VA from an overnight sail down the Chesapeake Bay. The line had broken free during their travels. The engines worked fine. The prop and rudders had no issues. The auto-pilot kept blowing a fuse….but there would be no diving for lines.

Our two cats, Soxy (black and white alley cat) and Earl (16 year old Siamese) were on board for this sailing adventure. Both cats have been on board with Cat Maudy for a year, but neither had done much sailing due to the long list of repairs – keeping Cat Maudy at dockside. The cats loved boat life — at dockside. That’s all they knew. Until now.

Soxy discovered she could not keep her balance on a rocking boat. She ran scared around the foredeck 3 times…and the crew had to catch her, and lock her inside. Surely she was looking for land, and an opportunity to escape the moving boat. Earl slept through the entire trip.