Sailing south on a broken boat…and an unknown crew 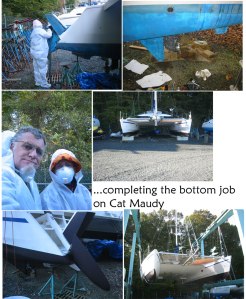 We worked tirelessly on Cat Maudy, for over a year – to bring her back from “deathrow”. We closed the deal on Cat Maudy – the day after Thanksgiving 2006. The price was right, but she was in serious state of disrepair. Much progress has been made, but her list of necessary repairs remained long and significant. She has not seen a lot of sail time with us, and I was concerned she was not ready for this voyage. Captain Pat wanted to give her a chance to prove herself. We left it at that. Destination Charleston SC. Winter in Charleston. South enough so that we could avoid freezing weather….and not too far south, so that I could travel back to Maryland in a day trip via Amtrak train. I had an 89 year old aging father to care for in Maryland, and not ready to be a full time cruiser.

Captain Pat had signed up fellow captain and friend Tim to sail south from Baltimore MD to Charleston SC. After weeks of calls and searching for a 3rd crew/captain — we had exhausted our list of friends, sailors and anyone who might appear game for this adventure. It was unlikely that a 3rd man would become available, so Captain’s Pat and Tim worked through the details of a dual captained sail over 3-4 days. It would be more difficult for two persons coordinating sleep requirements, and sailing should the weather deteriorate — but it was do able. After all, people single-handedly sail across the oceans.

On the 11th hour Thursday eve, the night before departure – we were busy on deck checking lines, and electronics — when a dock passerby offered to assist. Sure, we could use some help. So, Derrick hopped aboard, and proceeded to spend the next hour on deck helping with final preparation. First impressions? He seemed like a nice guy. Very helpful, and knowledgeable with boats. Eventually, the conversation led to “Hey Derrick, what are you doing for the next 3-4 days?” Derrick had no plans, and was more than happy to pack up a bag that evening, and be ready to set sail in 24 hours.

If we weren’t in a state of desperation for crew, this should have been a red flag. How many people do you know have absolutely nothing to do for the next 4 days and can drop everything to join you. No money was involved – we weren’t paying him for his time. All we could offer was food and board for the duration of the sail. In some ways, I admired a person who was not tied to a traditional lifestyle (work, family, day to day details) – and their belongings could pile into one duffel bag. My inner voice was begging for me to listen to objections…but I successfully tuned out that voice.

As for me…I was “ok” with not being in this “Cat Maudy goes south story”. I’m not ready for ocean sailing, big seas, big weather. I’m a sailing novice…I admit it. Plus, as a small business owner, I can’t simply disappear. Someone has to hold down the biz…and things were busy this time of year. It was “snow season”, and our government clients depend on our Snow Removal Software to keep the roads plowed and the elected officials content. I had plenty of excuses. I left my “home” on Cat Maudy, with Captain Pat….to return temporarily to land life.

Captain Pat would soon depart the comfort of dockside, with Captain Tim and new crew mate Derrick on Cat Maudy at 7pm on Friday in 40 degree temperatures and a persistent drizzle of rain. The plan? They would sail all night to Norfolk VA and arrive during the day. Spend the following night at anchor, and then depart the mouth of the Chesapeake, and sail south on the “outside” (ocean) for the remaining 3 days. Projected arrival into Charleston SC was Tuesday AM. That was the ‘plan’.