The morning alarm blared far too early and this time coffee was not strong enough to loosen my fog but that was OK as Jill was driving us today to our simulation run of the Utah Canyons — via downtown Washington, DC.

Our Thelma and Louise cross-country road-trip for The Grandfest is less than 2 months away, and we both were having car concerns. While we may stray from details in the original movie flick — I longed for safety features, and Jill preferred a car that would just drive itself. The car gods granted each of us our wishes – and we traded in old cars for newer models. When Jill arrived to pick me up for destination-DC, we stood outside pushing the key fob begging her Jetsons-electric car to open the doors. 10 minutes later the car agreed to let us in, and off we went — not quite ready for the car to drive itself. 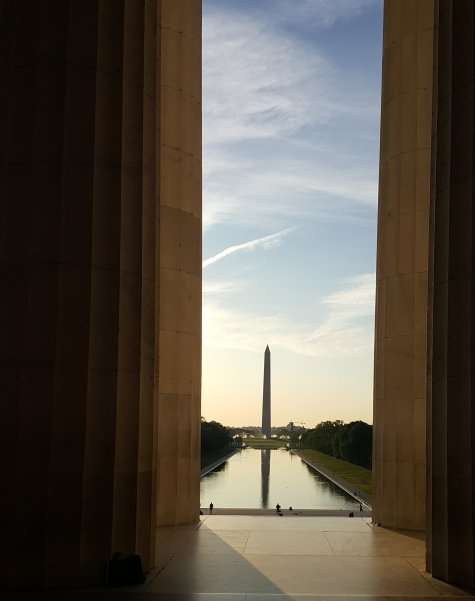 We arrived at a parking garage just off DC’s Southwest, and bid the battery-sipper goodbye. Off we ran, searching for desert sand, rock scrambles and views that would force us to stop for photo ops while city-dwellers and tourists sleep.

What began as a run along the sand-gravel foot-paths of the National Mall, turned into a monumental adventure that left us in a state of awe.

We ran figure eights on the Mall in the direction of George — The Washington Monument — and took several pictures of it’s grande size, before landing at the World War II monument. We ran the circle of this monument several times — mostly because we couldn’t figure out how to get out — but eventually we did, and I suggested to Jill that we follow a dirt path that spun off to the right.

Kindly, she agreed and we found ourselves near a desolate pond where no early morning runners could be seen. At first we were glee to run the water line all by ourselves, but soon we discovered the duck and geese community had turned the pond into a toxic mix of bird poo, and the stench increased to the point where we could no longer breathe, so we detoured and landed at the Vietnam War Memorial.

This is a massive wall, and that in itself with all of the names of US men and women who paid the price was a moment for reflection. We also reflected on the large group of volunteers — young children to seniors — working the wee hours. A mostly Vietnamese community picked trash and leaves along the length of the Wall — silently, with tender care, while avoiding any eye contact.

Our run next took us to see Abe — the Lincoln Monument — which required a climb of many-many steps, and we decided this was a-kin to a Bryce Canyon’s rock scramble (a polished marble version). To the tunes of Rocky floating in our minds, we ran to the top of the Abe’s house and stared at the big man in the chair, before turning our gaze outward toward the Reflection Pool. The sun was rising, and we had more running to do. In rock-scramble fashion we descended from big Abe and took off to for a close-up of Tom (The Jefferson Memorial). 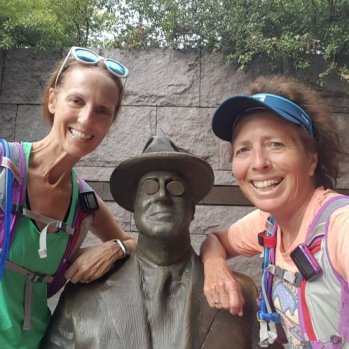 First things first. Running around the tidal basin we couldn’t help but notice how the high-waters have swelled beyond their concrete containers, pushing our run inland to higher elevation (10 feet above sea level?) and on dry land we arrived at Franklin’s place – i.e. the Franklin D Roosevelt Monument.

Franklin’s presidency spanned 1933 – 1945 and the math on that is 12 years and we let that sink in. A President who saw the country through the Great Depression and World War II. As we paused our run to contemplate a time of food lines and Frank’s words of comfort to a country who needed to be comforted, we marveled at how lucky we were to have this private moment with a 4 term president.

Back to running we were now in search of Tom — the Jefferson Monument. Tom’s dome is under construction for a mold issue, but the monument is open to the public and here we found another opportunity for a rock scramble — a run up the steps of the Jefferson. After another photo-op, we descended and Jill suggested we run to the Imo Jima Memorial located in Arlington. I flat out refused adding 15 miles to our run, so we settled on running to the Korean monument. 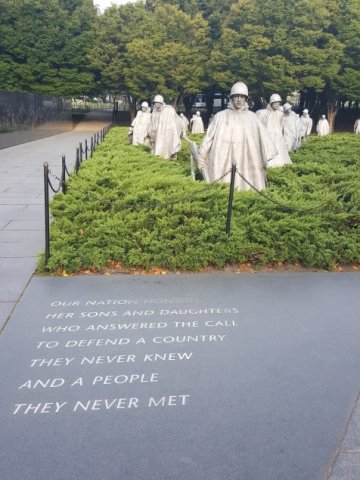 After the Korean, we found what looked to be a large marble gazebo, and learned that the District of Columbia had constructed this monument to honor those serving in World War I. The monument claimed to have 26,000 names inscribed, but we saw only 200 before deciding that we wouldn’t have enough time to count 26000 anyway, so off we ran again, looking for monuments we may have missed. 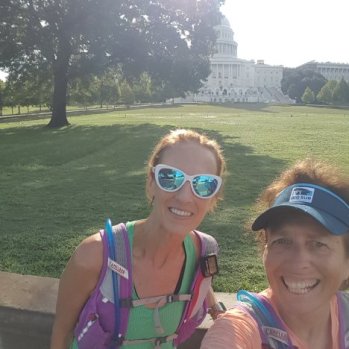 Our final miles took us back along the National Mall and over to the US Capital — which is not considered a monument — but is monumental just the same. We ran up Capital Hill and ran up the steps of yet another monumental structure – The Library of Congress — and you would only know that it was the Library of Congress by a tiny sign right next to the front entrance.

Since we were searching for The Supremes –The Supreme Court — we descended the many steps of the Library and found a neighboring structure with the word “law’ inscribed. Our legs had one last rock scramble left, so up we ran to the front door, a huge wooden door, and not one sign at all to confirm we were standing in the doorway of the Supremes. We asked a man packing several guns if this was the Supremes, and yes it is he said, and I inquired why there were no signs, but curiosity is not something encouraged by armed guards, so off we ran our final mile.

By now, the tourists have arrived, the food trucks are busy making gyros, falafel and fried chicken, and we high-fived our running success at simulating a desert trail-run with monumental views from the heart of DC. All that is left, is getting that electric car, to open it’s doors for us.