The fourth and final day of our East Coast Greenway WAY (Week-A-Year) tour, cut short due to Hurricane Matthew began at the Corner Cafe in the heart of Elizabethtown.  A cafe that is open “All Day” according to the neon sign on the window, or just until 2 PM according to the fine print.  We were certain to be done with breakfast before 2 PM.

With the riders split into three separate lodging locations – a meet up at the Corner Cafe gave us a chance to share the many features of these different venues.   At the Cape Fear Vineyard, cyclists enjoyed cabins, with porches and views, more socializing and sharing of wine.   At the B&B, another group of cyclists enjoyed lavish rooms, with tall ceilings rich with history and an owner who shared his Cadillac with the riders for “getting around town”.

At the third location, that will be renamed the “Bates Motel”, the last group of cyclists that were attracted to discount rates enjoyed listening to nefarious activities outside our doors with faulty locks, well into the wee hours, and who needs sleep anyway?   This prompted a preemptive need for coffee by 7AM at the local McDonalds and one final opportunity to share the schpiel with inquiring minds as to why we were dressed in spandex and wearing helmets.   Waiting for a coffee order to be filled, a young man approached.

Micky-D Patron (MP):   “Where y’all goin’?”
Yours Truly (YT):  “We were heading to Myrtle Beach, but thanks to the hurricane, we’ll just ride to some battlefield.  Not sure exactly where.”

“Where’d you start from?”
YT studies his face, his rich brown eyes filled with honest curiousity, and replies, “Raleigh.   We’re part of a group, the East Coast Greenway and we’re…”   YT stopped to study his face again.   Did he want the long version or the short one?

MP stepped closer, and YT decided he was still listening, waiting for more.
“We’re part of a group that is riding bicycles from Maine to Key West Florida – you know, along roads and connecting trails….”

MP tracked YT’s every word, and YT continued.  “Each year, we ride one week along this 3000-mile distance, and –.”

“Can I have four dollars?”

YT grinned and silently reached into her purse fumbling to find two.   Handing him the only bills she had, seemed like a fair trade for someone to listen to her ramble on after a sleepless night and before the first sip of coffee.

Back on our bicycles, we toured rural North Carolina that included farmland, cotton fields, Baptist churches and the occasional vintage gas station that sold groceries (depending on your definition of food), bait and gas.   We passed White Lake, endless pine trees and made our first palm tree sighting.

We arrived at Moores Creek Battlefield National Park, where we were greeted by the amazing ECG staff who hosted a picnic lunch.   While our tour this year came to an abrupt end,  we would pick up next year where we left off.   And as we rode the shuttle bus back to Raleigh, away from the looming hurricane, a sense of gratitude permeated the air, to have once again bonded with our bicycle ‘family’.  Touring the East Coast one pedal rotation at a time on a path that connects cities, connects bicyclists and outdoor enthusiasts left an immeasurable after-glow.   We are indeed the lucky ones.

~~~~
The East Coast Greenway WAY tour is about experiencing by bicycle one segment of the grand plan  — 3000 miles of bicycle friendly roadways and trails between small towns and big cities and flavored by the human connection along the way from Calais Maine to Key West Florida .   This year’s segment is scheduled to begin in Raleigh, NC and finish at Myrtle Beach, SC – approximately 330 miles.  Nearly 40 cyclists, and a dedicated ECG staff made it all happen. 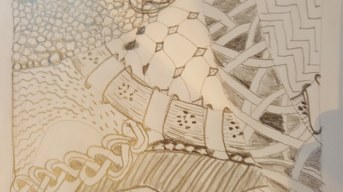 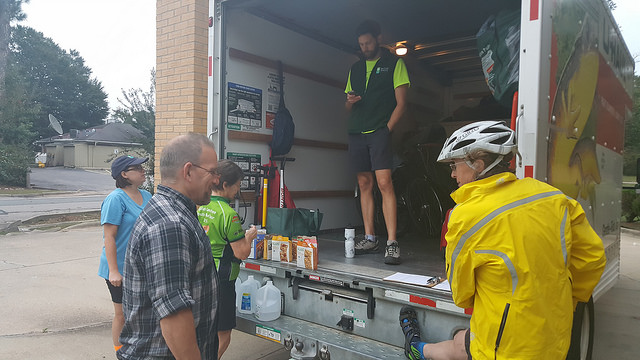