Running the Alps of Crozet

The Alps of Crozet are located in France, exactly where they belong.

But, if you are not needing to cross the Atlantic, live in the vicinity of Washington DC, and have a “thing” for running uphill in an all femme half marathon – the Alps of Crozet located in the foothills of the Blue Ridge Mountains in Crozet VA is for you.

Our sistahood of 7 – spoiled by running near sea level, and typically opting to avoid hilly terrain – was unprepared for an Alp-edition half marathon.  With the exception of Deb and Kim – who arrived early and drove the course.  They knew what they were getting into.   The rest of the sistahood, upon arrival – stared blankly with mouths wide open at the mountain line.  Followed by a steady hum of “this doesn’t look flat” murmurs.  Apparently we all missed clues about the “alp climbing” challenges of this running course – including:

The sistahood arrived in Crozet VA the day before the “Bad” race – in 3 shifts.  The role of the first shift  (Deb & Kim) – was to get to our rental chalet early, have first dibs on the bedroom choices and still somehow choose the “outdoor living” section of the chalet.  The area without heat.  OK ladies – if you must.  The second shift arrivals of Jill and Mel – had the role of placing chocolates on all of our beds.   They forgot, and focused on consuming a carb loaded dinner feast instead.   I can’t blame them for forgetting the chocolates.  The shift 1 & 2 sista’s devoured Deb’s gourmet pasta filled with butternut squash.   By the time the late shift (Jane, Tamar & Emma) arrived,  our momentary sadness over lack of chocolates – was quickly replaced by consuming the remaining gourmet meal – and taking the rooms in the chalet WITH the heat.  Yeah that’s it.  Oh darn – we have heat!

We awaken at oh-dark-something, and proceed to replenish our bellies with bagels and bananas.  And coffee.  And the fact that we are running in less than 2 hours on a terrain that would soon feel like the name of the series (“Bad”) – hasn’t fully set in.    Likely because we were blissfully ignorant.  The temperatures were in the mid-30’s, no wind and no rain.   Life seemed ideal – before the run.

Our 15 minute drive to the Crozet Park – was toward (not away from) the looming mountains.  With an event that has less than 100 runners – we parked 100 feet from the start line – and proceeded to pickup our running bibs.   And check out the other runners.  Who all appeared pretty ‘bad ass’.  I wanted to ask someone “are we running into those big mountains” – but thought better of it.  Deb – who will be running her very first half marathon – is staring at the mountains and looking pale.  Tamar is talking about turning back after 4 miles.   Jill offered to do re-con work at the coffee shop and just skip the run.  Kim decided that she no longer had a time goal for this race.  Melanie was smiling and looking energetic.   Emma wanted to know if she could talk to me while we were running, and I remembered I had forgotten to bring my “goo”.   There you have it.  We are ready to tackle the Alps of Crozet.  And 5 of us piled back in the car to drive back to the Chalet -to retrieve my ‘goo’.

The nice part about small races – is you can arrive 5 minutes before the “start”, and still have plenty of time to park the car and get in line.  There are no cannons, gun firing or loud booms and whistles at the start.  A lovely lady just says “go” – and we are off.   With less than 100 people running, we quickly spread out and had the roads to ourselves.  We had time to spend with our thoughts – especially about the hills.  And we climbed these hills for nearly 10 miles — with a few downhill dips (not nearly enough) on one of the most challenging half marathon courses along the East Coast.  That’s my story.

But the best part of the story – is that we all finished, claiming our warrior “Bad to the Bone” badges as follows: 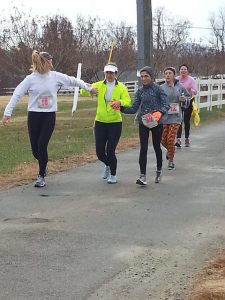 The “Baddest” Fashionista Badge – goes to Ms. Tamar – who despite some initial angst about running the full Monte (13.1 miles) – did it in style.   Sporting her fashionable on-sale Lululemon jacket for $40 dollars – Ms Tamar kept her thoughts focused despite the many barking dogs along the course.  At one time, when Coach Mel noted that the dogs looked like pack Wolves – Ms. Tamar remained composed as she quietly shielded herself by repositioning Deb and Mel to be the wolf front line.

The “Baddest” Coach Badge – goes to Ms. Melanie.  The strength of the pack is in the Wolf, and the strength of the Wolf is in the Pack.  Despite the course having it’s fair share of barking dogs (or wolves as us city folks call them) – Melanie ran alongside her mom Deb, shielded Tamar from the dogs,  and was the energetic force in keeping everyone’s thoughts distracted from “oh joy, another hill”.

The “Baddest” First-Time Half Marathoner Badge goes to Ms. Deb.   Oh sure, she could have looked for a half marathon that was along a flat course, such as a beachfront.  She could have selected the “easy route”.  But no. Not Deb.  Deb said to herself — “I need my first half to be a huge challenge….and I need my sistahood to suck it up with me” – and there you have it.  For the record – it was Deb who selected this Half Marathon event.   Not only did she finish it in style – with arms raised at the finish (Coach Mel raised them for her) – but there are rumors that she immediately started talking about her next half marathon.  Mr. Faulkner A! 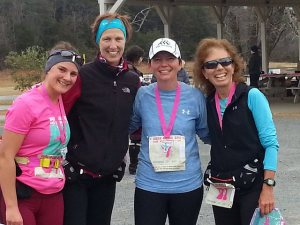 The “Baddest” Bad to the Bone Badge goes to Ms. Jill.   In 2014, Ms. Jill discovered that being around the “sistahood” can be truly bad for your bones.   In the spring…during a sistahood event — resulted in broken ribs.   In the fall…just thinking about a sistahood event….resulted in a broken foot.   Yet despite the potential for more rib cracking, bone breaking activity – and “just” released by her doctor to return back to running – Ms. Jill went out to overachieve.   Instead of running the 5K course, she did a 10K.  No surprise there.  Then she ran to the coffee shop, scouted out the goodies – and returned back to the race in plenty of time to watch us all finish.

The “Baddest” Conversation Pace Badge goes to Ms. Emma.  According to all of the books I’ve read, “conversation pace” is about running at a comfortable pace – one at which you can carry on a conversation.    Emma, however defies all training manual, bio-mechanical, aerobic capacity, VO2max logic – and can carry on a full conversation regardless of hills, running speed or any other challenge.  She pointed out every landmark on the course — the chicken coup, peach orchard, big dogs, barking dogs, and checked her Garmin for the latest stats every 3 minutes.   It is truly an amazing feat – and I’m looking forward to the medical study that unlocks this code.

The “Baddest” Stealth Runner Badge goes to Ms. Kim.   Oh sure.  She says that she won’t be running a 2 hour half marathon – but don’t underestimate the steady pace and rhythm of this savvy runner.   Claiming a Top 3 podium spot – Kim climbs the “Bad” hills without exertion – no loud breathing.  Pure stealth.  Complete running economy, and finishes without the need to keel over and collapse.  And if that wasn’t enough – a PR to boot!

The “Baddest” Maintenance Runner Badge – goes to moi (Jane).   Starting with forgetting my goo, and unable to decide if I should wear my gloves (opted not to) – one thing led to another.  I had only single-knotted my shoes – so by mile 5 the laces came undone.  At this point – I was gasping for air, my eyes had teared up and I was likely foaming at the mouth – but my fingers were frozen.   I spend most of my time willing my fingers to tie my shoe laces – a process that felt like 10 minutes.  Emma and Kim are now long gone.  By the time I catch back up with them – my water bottle had frozen.   Then it was time for a goo…but my fingers were so cold I couldn’t get it open.   Ooooh the maintenance needs of a runner…. 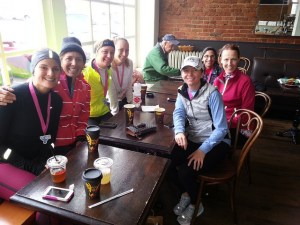 With all sistas having finished, high fives and smiles prevailed.  Thanks to Jill’s recon efforts finding the Coffee Shop — we wasted no time settling into a hot cup of Joe, and sharing runner warrior stories that only get better the more times they are repeated.   Add a few trips to the local vineyards for wine tasting – and by nightfall – our running adventure resembled the Alps of Crozet.  An incredible weekend with the sistahood!