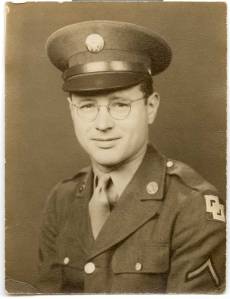 …was the youngest of 7 children. He grew up in Childs PA during the Great Depression, and was called to service for his country on May 29, 1942. Here is his story, through the many letters that he wrote home to his family – during his time in military service.

Russell provided a “support role” to the combat troops during this time period. The military decides who does what – and they decided that they wanted our Dad to manage troop recordkeeping.

The letters that are displayed in this blog, represent all letters that were written BY Russell and saved by Russell’s family members. It does not represent all letters that Russell wrote during his time in military service. Many letters were apparently lost – especially those written to his sisters Mildred and Ida, and his mother Helen Griffiths Wadsworth. Russell apparently loved to write letters back home – and of course to recieve notes back from family as well. He wrote many letters to his brother Wilson (and wife Helen), his brother Willard (and wife Grace) and their daughter Romayne, his brother Howard (who was also drafted to WWII), and Howard’s wife Elizabeth – as you will see in this blog site.

Why this blog? Russell had always wanted to create a “writeup” of the time that he served during WWII. In the following section “in his own words” – were the words from a document that he was composing, and had last updated in 2005. Unbeknownst to us, he had managed to collect from family and save these many letters, photos and documents for over 60 years. He simply became too frail in his later years to finish his project. Thanks Dad, for giving us the chance to put this bit hof history together for you. So, like reading a book from start to finish, to glean the most from this window into WWII history, I recommend reading each letter in chronological order, as displayed in the site – from 1942 thru 1946.

Please respect, that this is a PRIVATE blog site, and is not published or listed on search engines to the internet public. Reproduction of any materials without permission is strictly prohibited.