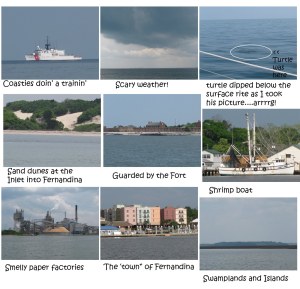 With a 4-day unheard of weather window, we were jones’n to make 4 consecutive day hops…to Charleston SC. I had plenty of time to triple check the weather before we departed at daybreak. That’s because the anchor alarm started blaring at 3AM. Our software “thought” we had moved from our anchored position….but really we hadn’t moved. Since you never really know for sure – I didn’t dare turn off the alarm. My sleep state was over.
Every weather and mariner forecast predicted that seas would be flat…with light winds from the west. No chance of thunderstorms. One out of three of these components turned out to be correct.
The seas were VERY flat. Light swells gently rocked the boat from the southeast. The winds however – were from the NORTH. Not “North WEST” or “North North WEST”….but completely NORTH. And we are headed NORTH. With the winds hitting us on the nose – there would be no sailing today. Thunderclouds were forming everywhere. We motored. As fast as possible.
The highlights of our trip from St Augustine to Fernandina Beach include:
– 4 sea turtles, of which I had no luck in photographing so you’ll have to take my word on this
– many dolphin friends joined Cat Maudy for the ride
– we watched the Coast Guard do training exercises near Jacksonville, and we’re very happy they didn’t point their weapons at us
– staring at very BLACK clouds hoping they wouldn’t turn into waterspouts
We arrived at Fernandina Beach Florida (on Amelia Island), as our last stop in Florida – on our northbound trip. To the right of the channel…was Georgia. We are so close, that we can throw rocks at Georgia…but we didn’t. That wouldn’t be nice.
To the west…is beautiful, pristine swampland. Beautiful in comparison with looking to the east.

In the east, are a series of paper factories…which smell bad, and dozens of shrimp and fishing boats…which also smell bad. All of these bad smells are attracting a lot of bugs. We waste no time closing all of the hatches.
We arrived at the Fernandina Harbor mooring field – and latched onto a mooring. The currents in north Florida are swift – and we didn’t want to wake up discovering we had dragged anchor into Georgia.