Camping out at the Culinary Tent….at the Coconut Grove Arts Festival 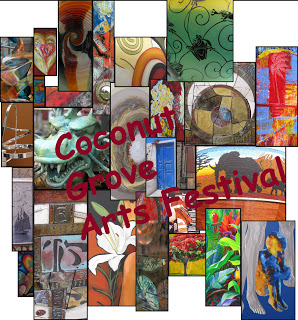 After staring at our computers, and each other for most of the morning – it was time to tackle a large dose of humanity – at the 47th annual Coconut Grove Arts Festival (CGAF). With the winds gusting to 30knots from the southwest – a soggy dinghy ride with 3 foot waves was out of the question. We will wait for the once per hour, water taxi shuttle to shore.
The water taxi rides are a perfect way to get the lowdown on weather windows, cruiser stories, and seeing who clocked the most winds in the near hurricane that ripped through the marina the night before. I had clocked just over 60MPH….but two sets of cruisers insisted that another burst of wind ripped through the marina hours later at over 70MPH. With each cruiser we spoke with….the windspeed increased by 5-10MPH. Pretty soon, someone will have recorded a Cat 5 hurricane. Cruisers…have a lot in common with fishermen.
Our marina is located at the heart of the Coconut Grove Arts festival. The roads to and from the Dinner Key Marina are barricaded — funneling all human traffic into a ticket booth. It didn’t matter if you had no intention of visiting the Festival….if you wanted to cross the street to get to the other side…you must pay the admission. In the spirit of supporting starving artists….we paid for two tickets….and gingerly stepped into a gulf stream of humans.
As we lost all comfort of personal space….Paddy and I plodded with the herd of peeps. Walking is out the question.  We stopped when the peeps stopped….waited for them to adjust their baby carriages….watch them become confused…..or suddenly change direction when a peep realized their significant other (whom they were having a conversation), was a stranger. It was easy to get separated and lost – and there is no chance of hearing a cell phone ring with the drone of 150,000 humans. Paddy and I tried drafting…where I lead and he follows only inches behind me….keeping a precise cadence with my footsteps. This works well for inline skating…not so well at the arts festival. Too many peeps….and I thought for a moment that I was holding someone elses hand.   Fortunately, Paddy’s fashion choice from his wardrobe of 30+ BRIGHT ORANGE Orioles shirts (courtesy of one too many free-t-shirt nights at Camden Yards with my brother)…came in handy. today.
After walking past a mere 15 artist booths (out of many hundreds!)…it was time to locate FOOD. There were dozens and dozens of food tents specializing in Pizza, Greek, Chinese, American, Cuban….and on and on. With so many food choices, Paddy and I opted for the tent with the shortest line….and shared an overpriced Cuban sandwich. We skipped the $4 soda. We’ve morphed into cruiser mentality…..which is somewhere between cheapskate and freeloader.
Our next stop – is the Culinary Tent. Every hour, a distinguished chef prepares some delicacy…tells you all the details how the food is prepared…..and then a group of lovely ladies walk around and serve you samples. We found 2 chairs….and parked our butts for what could become the remainder of the day. Oh sure, there are some terrific artists from all over the world just a few steps away….and OK…maybe we’ve only seen 15 or so…..but in the Culinary Tent – we’re talking free food.
You know that feeling you get when suddenly you are in the right place at the right time? You couldn’t have planned it had you tried….but when you stumble upon it — you practically want to go play the lottery — or at least brag to your best friend?

Try to contain yourself, when I tell you — that within minutes…Jeff Lindsay – the writer behind Showtime’s series DEXTER (the friendly serial killer – who only kills the bad guys making it all OK…OK?)….was featuring Blood Oranges, some fennel thing and how to use knives. I can feel your envy, so try to settle it down. YES YES YES….we are BIG FANS of the series Dexter.  Don’t ask how we watch this without TV on our boat.  All right, you can ask.  We download it from the Internet for FREE.   What else would you expect from a cruiser?

Jeff reveals during his cooking presentation:

– his inspiration for the character “Dexter” came when he was speaking at a Kiwanis Club luncheon…looking out at the real estate brokers, insurance agents….and bankers….and thought that serial killing may not be such a “bad thing”

– it took Jeff 5 years to get his book published…after being turned down dozens of time, and being married to a Hemingway!
– he writes every day from 3:30am – 6:30am….and that’s it. 5-6 pages per day

Sitting in the Culinary Tent, eating FREE FOOD…and listening to the writer who “created” Dexter – was turning out to be a bonanza of a day. Paddy and I returned to the boat…with bellies full of food from the Culinary tent, and having visited the least number of artist’s booths…