Well, since I last wrote to you, I’ve had a considerable change in my way of living in that I have since been billeted in a couple of English homes, and I must say that the people really treat us swell. The people I am with now are just the average over here, but here’s what they do for us. They call us every morning just about 6:45 and always bring up a cup of hot coffee for each of us. They welcome us practically as one of the family and really want us to feel that way. Last nite for instance I did a little washing which consisted of my underwear, and field jacket. All I asked for was a place to hang up the stuff to dry. She actually felt put out to think that she shouldn’t be doing it for me. So she took particular pains to see that the stuff got dry and then ironed everything including a pair of socks. The field jacket came out very clean and I would have been satisfied with it when it was dry, but no, she had to iron that too, and took a lot of pains with it too because frankly, I believe it looks better now than when it was new.

I know that they are rationed pretty strict over here, but no matter what it is, practically all will offer you something and will insist on your taking it, and I’m telling you, you sometimes have a hell of a time turning them down, because they do actually appear to be hurt when you refuse.

You’ve probably heard something about the English beer. Well, I know when I first started of it, I didn’t think it was so hot, but I find that by shopping around, you can find some that will suit your taste. Maybe it isn’t quite as good as the beer at home, but one gets used to it. I’ve found that some lagers or ales, though not served cold except at a few choice places, are almost on par with some of the beer back home.

And the majority of the people are as friendly as can be found anywhere. They like to talk and ask questions about the states which is only natural and they are getting an impression of us that they don’t get in the movies, which is the way they thought we all were at one time. Its really quite an experience and I don’t believe that I would miss any of it up to now.

By the way, I might mention that I have your letter of June 17, but it took quite a while to come. Why don’t you use V-Mail? Much more consistent.

Guess I will close for now. Regards to Elizabeth and Grant. 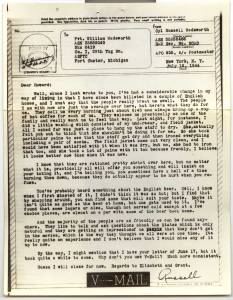 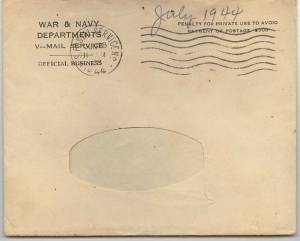 1944 Letters, From England, Housed by English Civilians, Written to Howard