Dear Helen and Wilson and Bob:

Well, I hardly know just how to start this letter as it was just a few days ago that I received word of Richard’s passing. I was really shocked when I read about it. You three have my deepest sympathy. But it still makes it hard for me to believe.

I could write a lot of things here about him but such would only tend to add to your grief so I’ll purposely skip them. He just turn 12, didn’t he? So, I’m going to start writing about something else.

I’m sitting here listening to the radio this afternoon and just listening to some good old American programs. One of the fellows in the office has a Zenith portable and we just write our letters and listen to it at the same time.

I just got the letter from Grace giving me more details about things and also some newspaper clippings.

Remember that red headed fellow I used to run around with back there. He told me that his brother-in-law, who is also a friend of mine, will probably be flying one of the big B-29 bombers before long. Boy I wish I were in his shoes.

I really can’t think of much more to say this time. I’m looking for the package any day now too.

Keep your chin up!
Russell 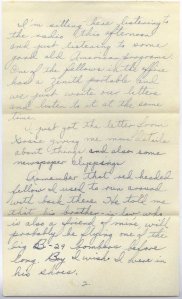 Tragedy strikes back at home. Russell learns that his 12 year old nephew, the son of Helen and Wilson Wadsworth has died.

1944 Letters, From England, Housed by English Civilians, Written to Wilson-Helen