What a country this is. All people are strangers. You can’t speak with them, nor they with you. About all you can do is gesticulate. At least it was that way when I first got here.

Each town has its narrow winding streets with portions of most buildings overhanging same to make the most of a crowded space. People gaze at GIs when they pass from open French windows. Every building has French windows. Why not? It is France.

The French seem doubtful about there own money though. They will pay 100 Francs for a dollar, which at our rate of pay amounts to two dollars for one dollar. It shows how much faith they have in the American dollar. But just don’t get caught selling a dollar. It’s rough.

They use every type of conveyance conceivable in moving from place to place. You see people riding bicycles; old, high, two-wheeled, horse-drawn carts; autos using charcoal burners; or some other type of just plain push-cart. Yes, shanks mare.

The people all seem to be well dressed, especially the women. The clothes are good, and make up is good, and because of the perfume they use, you can smell them a block away. They do have plenty of perfume, and all kinds of it. And there seems to be plenty of women’s clothing– a lot more than I saw while in England.

But when I walk down the street, I just get the feeling that I can’t trust anyone. Some of this is probably due to the lack of knowledge of the language. And then you have to remember that the Germans were around here for about 4 years too, and you really don’t know who’s who. In this respect, you may ask a question in French and get the surprise of your life when the party answers in English. There certainly are a lot of people who speak several different tongues.

I guess the black market is pretty strong too. Especially so in gas and cigarettes. They steal gas from GI trucks just like they used to steal coal from slow moving coal trains at home. People will stop you on the street and offer to buy cigarettes from you at prices, which if we were paying for same anywhere, would be exorbitant. You know there are a lot of GIs who don’t smoke.

There’s no entertainment to speak of at all. I have seen one movie since I have been here, and then the projector was on the blink and no one could understand what they were saying. If one goes into town, there is still nothing to do. Of course, there is plenty of champagne to drink and it costs about three dollars or better for a quart bottle. And at home it’s a luxury.

We have a shower room now which is probably a lot more than some guys over here have. Went without a shower for a couple of weeks here about a week ago. But I’m back on schedule now. I think I had B.O. That reminds me; the Army must think there is a lot of B.O. too as our soap ration now is nothing but Lifebuoy. But as a soap it isn’t bad; but the odor!

But there’s no excitement, at least in our end of the business. Oh, I read a lot of interesting stuff on paper, but that’s about all. I get the biggest kick out of the whole think when we change our address from time to time. That’s when I see some of the country.

We are near a town right now, but as I mentioned before, there’s no excitement or entertainment there.

Other than that, I am picking up a little French and I’m going to see if I can’t cook up a deal to teach some Frenchman or women English while they teach me some French.

That’s all for now. 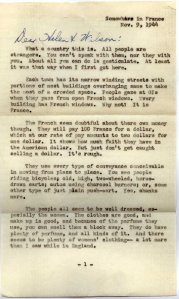 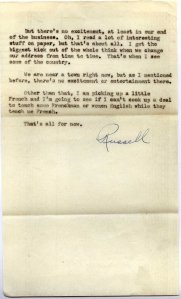 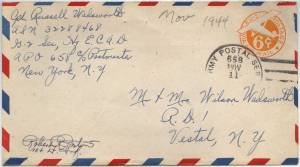 1944 Letters, From France, Written to Wilson-Helen