Well, how many points have you. I’ve only 59 so I’ll sweat out the Army for some time. You know, in a week or so I’m going to tack on a hash mark. Yep, three years ago this month.

A little over a year ago, I left New York and landed in Scotland on a damn big boat with several thousands of GIs. It took us eight days to make the crossing and I remember some pretty rough weather. I think I left the day you came in the Army.

Right now I’m housed in a hotel in this little German town. The hotel room has beds for three of us and a bathroom adjoins the rooms. One of the first things I did was take a bath in the tub — the first since I left England in a tub.

Mess is in a real dining room with waitresses, mostly displaced persons. I don’t know whether you’re eating from a mess kit or how, but we’re giving ours a rest now and eating from china once again. Meals are a lot better tasting and a cup of coffee tastes like a cup of coffee.

The town itself is picturesque, neat, clean modern. And from a personal viewpoint, those are all the typical German traits. It’s really a lot like say Endicott for example. There’s a beautiful park nearby with deep wells that bring various kinds of health giving water to the surface. Tennis courts are available, a baseball diamond has been laid out. A theatre is to be taken over. If a break comes on furlough and passes things will be fairly nice. We’ll need the latter because of the not-fraternization policy.

Guess I’ll close off for now.

PS Today is the 20th. Couldn’t find your address before. Received letter from Elizabeth today with it in so — 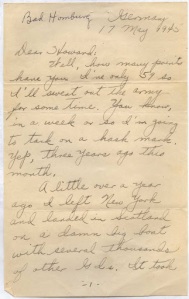 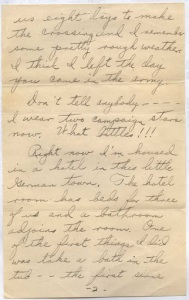 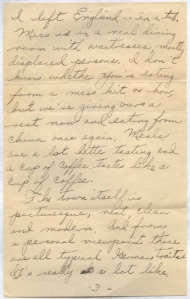 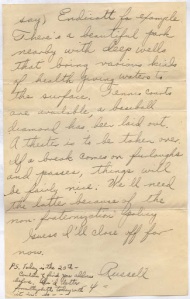 1945 Letters, From Germany, Written to Howard