Views along the trail of Miami South Beach

Cycling on tired legs and tired minds we made 3 U-turns on the same street in Miami South Beach during rush hour before figuring out that the ocean was to our left.  From there, we navigated along a multi-use trail shared with walkers, joggers and skaters and took in the sights of beach volleyball and a gentle surf thinking it how fine it was to be cycling.

We left the trail behind and joined the cars with a busy commute onto the MacArthur Causeway, and were pleasantly surprised at the patience of drivers who yielded to our group of 40 cycling hard to reach the shoulder of the road.  More tricky maneuvering along the roads in downtown Miami and a wait at a drawbridge, our group thinned into smaller groups of riders, and we continued to be in awe of the drivers who did not behave at all like their northern relatives in Fort Lauderdale.  Instead, drivers were polite, courteous and a shout-out to Miami commuters for sharing the road peacefully.

Reaching the M-Path — a paved trail under the Miami Metrorail — we returned to riding double-wide, conversations about what adventures lay in the queue, mini-stops for snacking and shade breaks.  Then someone noted that it took 2 hours to complete 16 miles (due to heavy traffic) and suddenly it was time to step up the pace.  We passed Coconut Grove and watched the cross street numbers inch upwards….62nd Street…85th Street…until the M-Path eventually ended.  Our route put us on The Busway — a road only for buses — with a bicycle path located alongside.  A long stretch of empty roadway — not a single bus was spotted — we had to ourselves.  We watched the cross street numbers ticking higher reaching 225th Street….264th Street…until eventually we exhausted the bus limits and found ourselves back on a trail, stopping under one of a few trees in Florida that knows how to throw shade.

15 more miles of cycling under a mid-day sun along the Everglades was needed to reach our lunch stop, and the thought of alligators or crocodiles lurking kept our pace strong despite our dwindling water supplies.   Reaching Alabama Jacks, we consumed pitchers of cold water yet still felt dehydrated — one of the nuances of riding in the open sun.

We had one remaining tall bridge to cross to reach North Key Largo, and by now a nice northerly 25 knot wind had setup which meant the bridge crossing would hit us on a beam reach – and finding the winds wanted to push us over the bridge into the water is one way to boost your adrenaline.  We held on tight, with bikes wobbling, wind gusts testing our nerves and forcing our bikes to move toward the center of the lane into the traffic and away from the edges.  Reaching the bridge summit, no one dared to descend at full speed, and we inched our way to the base, looking forward to protection from the mangroves.  Once off of that bridge, the tension in our muscles released just in time for the road to turn to the north and we pedaled hard into the headwinds for the next few miles waiting for that road to curve south.  And when it did, we found ourselves on freshly paved roads with wide shoulders and one bloody-rite tailwind for 15 miles.  How sweet it is — and hello Key Largo!

View along the jetty of the Port of Miami 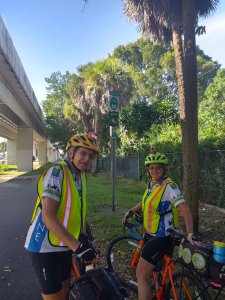 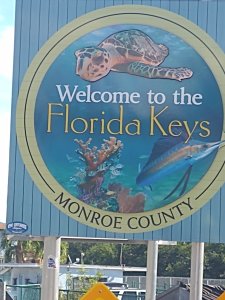 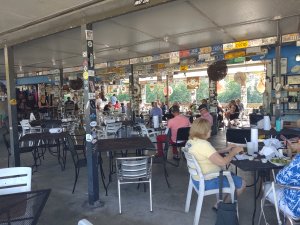 Lunch stop at Alabama Jacks — looking out over the Everglades