The sheer awe of Yosemite

After a marathon-recovery breakfast of avocado toast and fruit, we repacked our luggage and said goodbye to the Pacific Coast Mountains and headed east to Mariposa. 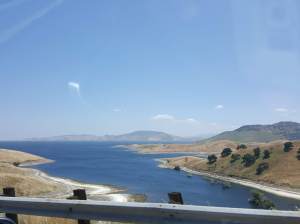 As our drive took us inland the terrain shifted from lush coastal mountains, to lush farm flats, to San Luis Reservoir where all of the wind gods exhale simultaneously, followed by miles and miles of almond trees and eventually scorched soil and dust where a little wind is all it takes to clog up the respiratory. 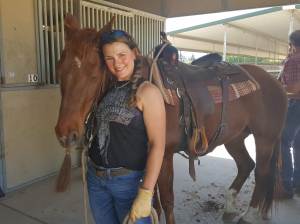 We stopped in Atwater, at Ray’s horse ranch so that Ms. Emma could put on a private rodeo, and while she didn’t actually wield a lasso, she did unveil her horse-riding skills.   Living East, Ms. Emma would not have gone near these creatures, but living West,  watching the entire Longmire series on NetFlix and taking lessons from Horse Whisperer Ray, she has unlocked a new passion.    She  brushed the beast, cleaned it’s hooves, combed it’s mane, talked to it, fed it, put on the bridle, made sure the rein had a hint of pink, lifted the saddle and hopped on wearing special riding boots and a helmet.  Moments later she had the horse moving where she wanted it to go, stepping forwards, backwards, sideways and always under the watchful eye of Ray who has an uncanny knack of instructing without words.

We spent the next day wandering the Main Street of Mariposa (population 2100), becoming regulars at Pony Expresso coffee, studying the many CBD options for healing sore-marathon-muscles, taking pictures with the Alpacas, hiking near the local reservoir, checking out Ms Emma’s bike route via car and realizing my DC fitness routine pales to the workout one can get in the foothills of the Sierra Nevada’s.

Next stop was a visit to Mariposa Grove near the southern entrance of Yosemite to stare at the giant Sequoias.  We hiked along the trail that lands at The Grizzly Giant — a contender for the top 25 largest trees with an estimated age up to 2400 years old — and let that take a moment to settle in.   We did just that.  We sat on a bench and angled our heads upward, wondering how anything could survive 2400 years and still be standing, in no hurry to move on.

The next day our California tour took us to the North Entrance of Yosemite — for a hike in the Valley before turning our sights upward toward Yosemite Falls.  Emma wore trail running shoes and mine were mere running shoes and none of this would have mattered except for the fact that we were hiking on slippery rock.  We hiked along the Valley and stared at the giant waterfalls, turbulent rivers that formed from mountain runoff and even touched the water just to make sure it was ice cold.  Emma suggested we hike up Yosemite Falls and not wanting to make a fuss about my slippery shoes, or my less-than-mountain-fitness I said “sure” and we took off.   We climbed and climbed.  The slippery rocks were covered with sand making them slip more and I took my time finding foot holds.  We gained altitude, my breathing became huffy-puffy and soon we were above the tree line, and I focused on looking up and not down.

Soon it was time to descend from the clouds and look down at the cliff we had climbed, and at that moment my lips formed a giant “oh no” knowing that my slippy running shoes were not up for the task.   Emma offered me her grippy shoes (we wear the same size) and of course I couldn’t let her wear mine and watch her slip-slide down the edge of the mountain, what kind of step-mom would do that? but Emma insisted, explaining her keen mountaineering skills, and I eventually accepted the footwear offering.   Neither of us slid off the mountain that day and note-to-self to be mindful of the virtues of proper hiking gear.

We left Yosemite with a profound sense of awe etched into our souls — awe of the rugged beauty, El Capitan, The Dawn Wall, Yosemite Falls, Mirror Lake and so many hikes and climbs that will wait another day.

The rugged beauty of Yosemite