Destination Georgetown – will wait for another day

My next ‘long run’ would be in a new neighborhood.   A new city.   On the Eastern Shore of Maryland and I was looking forward to running in new territory.   But first, we had to ‘get there’.

OK.  It wasn’t the best weather day for a 35 mile sail from Baltimore to Georgetown Maryland.  We were on a schedule.   Typically, schedules are a no-no for sailing.

The forecast was calling for rain, possibly a thunderstorm, and light winds 10 knots from the southeast.  The winds would be perfect, and we won’t mind getting a little wet.

We departed the Port of Baltimore at 9AM with a light drizzle and winds from the east at 15 knots.  At our dock, the winds registered 15 knots.  From the east.  By the time we navigated 1 mile – just beyond Fort McHenry – winds were a steady 20 knots.  From the east.  Did I mention – the ‘east’?  The east – is the direction we are traveling.  The wind is directly on the nose.  Surely this won’t last, and soon we’ll have those 10 knot winds from the southeast.

Making snails pace progress with now 20 knot winds on the nose, I checked in with the most dependable weather forecaster I know.  My brother.  My family is obsessed with weather – and who better to contact than my brother who reads every forecaster’s short notes, studies the radar and then adds his 2 cents?  He told me we had better hurry.  The weather would not be good in the afternoon.

By the time we had reached the mouth of the Patapsco River and entered the Chesapeake Bay – the winds had upped to nearly 25 knots.  Still on the nose.  I was confident that this weather would surely change for the better – but squall after squall of bucket dumping rain did not seem to change the wind speed or direction.

Our foul weather gear gave out in the first 2 hours.   Drenched, and with strong winds — we are getting cold, but figure — this weather has got to move on to brighter skies.

Somewhere out in the middle of the bay, the winds were creeping higher.  On the nose.  Our forward way slowed to less than 2 knots with the engines running at full speed.  There was no way we would make our destination – Georgetown MD.  And there were no weather holes we could tuck into.  Captain Paddy suggested we turn back.  Hard to imagine.   It is usually my role to recommend turning back.   I immediately agreed.  5 hours into our trip, we did an about face, and headed back to Baltimore.

This is when the weather got really “fun”.   With the wind now pushing us toward Baltimore, in less than 30 minutes of our ‘about face’ – apparently a typhoon arrived.   This is probably why my brother suggested that we ‘hurry’.   I didn’t have a need to look at the electronics to see what the actual wind speed was — but Captain Paddy made sure that I was informed.  “Oh my god – it’s over 35 knots” – Paddy yelled to me.   I’m already hanging on to boat parts, and then Paddy yells out “Geeezzzz….we’re over 40 now”.

Busy self managing (i.e. trying to stay composed and not completely freak out), I hoped that there would not be any more wind speed updates.   But there were.  Winds reached 50 knots.  By now, the Bay was in full ‘boil’ with huge waves pushing us, and Cat Maudy is doing her best at surfing along.   Thankfully it is a tailwind.  My eyes were fixated on the northern shoreline of the Patapsco River.   Once we had passed into the mouth of the river, I was sure that the winds would decrease with land protection. 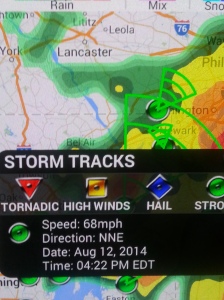 It seemed like a very long time, but we finally made it into the Patapsco — where the wind speeds dropped to the mid-30’s.   The rains were dumping more water, and we were both cold and weary from the strain of trying to navigate the boat, and “see” with raindrops pounding into our eyeballs.

By 4:30pm, we had arrived back to our dock space – at the Port of Baltimore.  The same space we had left 7.5 hours earlier.   Georgetown will have to wait for another day.    And my long run, will still happen (tomorrow).   Back in my home neighborhood.   At least for now.