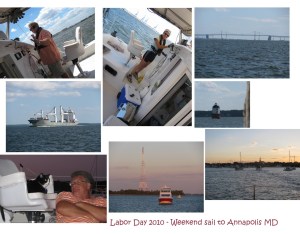 After 60 days of scorching temperatures over 90 degrees in the mid-Atlantic, a typical shortage of summer winds (which would have been too hot anyway), an exercise regimen that included 5 sprint triathlons and a host of other excuses (oh yeah – WORK!) – Labor day weekend changed all of that.

Temperatures plunged into the delightful range of mid 70’s, the humidity is gone, and thanks to a “cold front” – winds are steady 20s with gusts to 30. If Cat Maudy can’t get outta Dodge now…then she better have a pretty good reason.

In typical Cat Maudy form…we had no plan. Other than to depart the dock, and get the best angle on the winds. Where we are headed is unknown. How long we’ll be gone – again unknown.

What is known…is Soxy’s tummy wasn’t quite ready for motion. Soxy has been living large being an ‘A Dock’ kitty at Anchorage Marina for the summer – and suddenly bouncing around in waves was not part of her plan. Soxy is not in a good mood.

We put a reef in the main, and headed out the Patapsco River doing steady 8.5 knots. Added a reefed jib sail – and speeds are up to 10 knots. Unlike Soxy, Captain Paddy is grinning ear to ear and easily holding onto his lunch.

With winds from the west – we had many options once we reached the mouth of the Patapsco River. Feeling spontaneous, we opted to head south…. Will we then turn into the Magothy River? Nope.

We continued south under the Chesapeake Bay Bridge – and considered a nice quiet anchorage at Whitehall Bay vs a more ‘urban’ anchorage in Annapolis. True to form, we couldn’t decide – and opted to just let Cat Maudy go where she wanted. She choose Annapolis. We anchored in front of the US Naval Academy – and enjoyed an evening of glorious temperatures in the 60s and 70s.