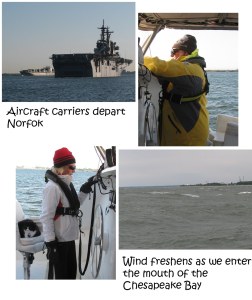 After 700 miles of offshore sailing during our “return to the north”, it’s hard to imagine that our most robust sail of the journey (to date) occurs on home territory. The Chesapeake Bay.

We departed downtown Norfolk at 6:15AM, and spent the next two hours motoring to the mouth of the Chesapeake Bay. We had a few obstacles along the way. US Warships. The really big ones. The aircraft carriers. We patiently waited for these huge ships to back out of their ports, and gain speed heading out the channel. You need to stay 500+ yards away, or else they point guns at you. Sipping coffee, we are in no hurry to become target practice.

As we entered into the mouth of the Chesapeake Bay – the seas are flat, and the winds moderate. With the jib and main sail up – Cat Maudy is ready to capture every scrap of wind – should it beef up. And it did.

It is generally a mistake to cut across the Horseshoe shoal (north of Willoughby Bay) to save time going north on the Bay. Usually this shallow shoal is laden with crabpots – but mysteriously, there were NONE. I scanned the water line repeatedly with my binoculars searching for one of the little land-mines that would ultimately connect with our prop and rudder….but NONE existed. This is most unusual, and I figured stealth crab pots were lurking for us “up ahead”. Remained on high alert for crabpots while cruising the southern bay shallow waters – just in case.

It is not particularly warm here. Temperatures are in the lower 50’s….and with the winds and steady rains – it feels like 30. Bundled up with long undies, 3-4 layers of clothing plus foul weather gear, 2 hats, goggles and mittens – you would think we were cruising in Alaska. Where did the warm weather go?

It didn’t take long for winds from the east to give us a chance to sail. Without motor. Our sail speeds ranged from 7.5-9 knots, and Captain Paddy’s mood is changing for the better. The sea state is getting very lumpy. The waves in the Chesapeake hit you about 1 per second. There is no “wait” between waves – and it didn’t take long for Soxy to get cranky. She likes a stable ride, it it is getting hard to keep any footing.

Cat Maudy is one of probably 2 dozen sailboats that have decided to depart Norfolk in the AM. We catch up and pass most of them (ok…just sayin’ ;-), but by the time we reach the Potomac, the winds have gone into kick-ass mode – and the majority of the other sailboats bail out for the day. Waves are up to 4 feet, and fortunately the winds have shifted more to the southeast. This helps the stability factor – and we are no longer being bounced around as much. Two other sailboats and Cat Maudy – make up the remaining regatta, headed toward Solomons, MD. We are now making steady 9 – 11 knots of speed. Add some 25 knot gusts – and Cat Maudy screeches along at 14 knots.

Without having Popeye The Sailor Man on board, trimming the sails, and prepping to gibe the boat for a final tack into Solomons – takes every ounce of strength I can muster. And that’s not much…or nearly enough. Somehow we managed to gibe without breaking anything. Our final tack brings us to more beamy seas, and the winds are howling. Cat Maudy shoots like a bat outta hell. I sure hope there are no crab pots in the vicinity, because there is no time for navigating around these. We race for shore, and tuck up into the mouth of the Patuxent River, escaping the feisty Bay seas.

The winds were so stong – that we blew out a batten on the main sail. We didn’t notice this, until it was time to bring the main sail down. The loose batten, that no longer rests in its track – is now flopping everywhere….and no matter what I do, it keeps connecting with the lazy jack lines. All of this techno-sail-mumbo-jumbo just means that I can only bring down the main halfway – until it gets tangled up because the the broken part. And, it’s windy as all get-go. Paddy is busy holding the boat in place, and gives me one of those “you gotta figure it out yourself” looks. Each time that the broken part gets tangled in the lines…I have to RE-hoist the main sail about 6 feet…to untangle. Then try to lower it again without making contact with the zillion lines that it wants to connect with. This is fun. (NOT). I’ve now re-hoisted the main 3 times…and re lowered – with no success. My happy mood is long gone. Time for plan B. Let’s just say that Cat Maudy and I exchanged some very SALTY words. I can’t repeat them here, but it seemed to work. The main sail finally lowered in position a top the boom.