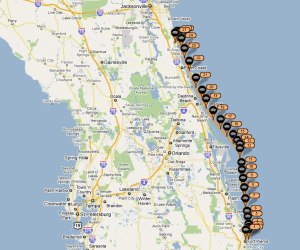 I’ve come to the conclusion that Ft. Pierce is a foul weather abyss. Expect endless days of easterly winds and pounding seas. You know you’re desperate for a sailing weather window, when you consider going offshore in conditions that previously would have been unacceptable.

So, here are the options. Saturday. One day. One 24 hour day. No more…no less. This is our “window”. After that – no more weather windows out of Ft. Pierce for a week. Easterly winds would subside eventually around Ft. Pierce….but would become favorable further “northward” along the coast. Translation: We could depart Ft. Pierce early Saturday….the sea state would be BIG and UGLY….but eventually the seas would get better. Swells from the east would remain BIG til we got beyond Cape Canaveral…then the sea state would subside. This boils down to two choices:

(1) We could sail for 1 day and get to Cape Canaveral in the daylight….or (2) use the full 24 hour window of opportunity – and sail overnight to St. Augustine — 164 miles.

There wasn’t much conversation on Cat Maudy for the first 4 hours offshore. I spent much of my time staring off at the horizon to avoid being seasick….and Paddy tended to steering the boat. So far, this was not “fun”…and I had to turn off the “little people” in my head who were chatting incessantly about how rough the seas are.

Within 30 miles of Cape Canaveral the winds and seas began to subside. This was the deciding moment. We either continue beyond Cape Canaveral to St. Augustine for an all-niter (160 miles)….or head in to Cape Canaveral (65 miles). Talk about undesirable options: Sail further offshore into unknown sea conditions and sail in the dark VS stop at Cape Canaveral and wait another WEEK for the next weather window. We opted to keep going. I couldn’t imagine being stuck in Cape Canaveral for a week.

The winds had subsided, and we were motor-sailing. Cat Maudy maintained a speed of 7 knots. At one point, we were 12 miles offshore – allowing us to clear the shoals around Cape Canaveral. You could barely make out the largest of buildings on shore. At this distance the coastline was hazy. Things were looking pretty “lonely” out in the ocean – until FLIPPER discovered the roar of our engines. When I first noticed the dark fin of this large mammal….I thought maybe it was a shark. But as he gracefully slid thru the water, and hopped over the surface, keeping pace alongside the beam of Cat Maudy – this was no shark!

Apparently, Flipper was having so much fun discovering US….that he sent a SONAR-GRAM to all of his porpoise buddies miles away. From a mile radius all around Cat Maudy….the water surface came alive with FLIPPER’s friends all racing toward us. They stopped whatever they were doing — feeding, napping, whatever porpoises do — and are full speed heading toward us. Within 60 seconds – Cat Maudy was the “place to be”. Dozens of porpoises came to greet us…and spent a good 15 minutes cruising, jumping and playing alongside Cat Maudy. It was very cool.

We passed by the last shoal of Cape Canaveral at 6pm, and changed course to head closer to the shoreline. By now, we had consumed our second (out of a total of 4 in 24 hours) PB&J sandwiches. Peanut butter and jelly sandwiches are the food of choice during bouncy sea states. No need to spend time prepping food in the galley….if that means you’ll be too seasick to eat it. So, we eat the ‘easy stuff” – PB & J’s.

Daylight hours were waning…and by 8:30pm twilight was replaced by moonlight. We are now 14 miles north of Cape Canaveral, and the sea state could not be better. Light swells from the south, and winds from the south to southwest. If we weren’t pedal to the metal to make the 24 hour weather window…we could have just “sailed”. By adding engine power to the sail mix — helped us keep a 7 knot per hour pace.

I grabbed an hour of shuteye around midnight, and then Paddy took his turn for an hour of zzzz’s. It might not sound like a lot, but just an hour of sleep can really perk you up. Time for another PB&J.

By 2AM…our moonlight was replaced by starlight, and a coastline of city lights. Soxy, our cat decided this was her moment to investigate the innards of our stack pack. The stack pack is a bunch of material that is used to “wrap up” our main sail. When we are sailing, the stack pack just “hangs” on either side of the boom. When we discovered Soxy was nowhere to be found….she had discovered hiding in the stack pack. Now, we are cruising along at 7 knots (sometimes 8)…there is dew all over the deck….it’s dark out…..and Soxy can’t seem to figure out how to get OUT of the stack pack. Instead of returning to where she go INTO the stack pack (near the mast)…she decided that the only way OUT – is at the end of the boom — which hangs out over the water. 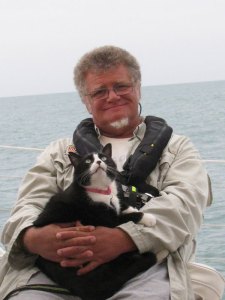 Now, Soxy is family. But with that said….we are not about to put ourselves in peril trying to save her. OK….maybe a little peril…. What is up with cats? Did you ever notice how they climb up a tree….find a little limb to dangle on….and can’t figure out how to return to the base of the tree? Nooooo….you have to rescue them. They like this. They want you to rescue them.

Soxy is peering at us, trying to get OUT of the stack pack – at a position where she will surely fall into the water. Aiii…. I tether to our forward lines…and creep toward the mast on a slippery deck. From here…I coax Soxy to walk along the boom FORWARD toward me. As soon as I can reach her…I grab her around the shoulders…and she hugs me in a death grip. Kitty saved. No one in the water. And, Soxy is quarantined INSIDE the boat until further notice.

By 4AM the sea state has completely flattened, and we enjoy a perfect offshore westerly breeze. We continue motor sailing….for optimal time. By now, our eyes are blurry….and it’s hard to tell the difference between a boat who might be navigating near you….or if it is just lights from the shoreline. We are getting really tired….and daybreak can’t arrive soon enough.

We arrive at the St. Augustine inlet around 7:30AM – and navigate to an anchorage. Anchors down….confirmation that we are “holding” ground….and collapse from exhaustion.