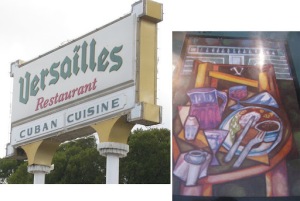 After researching Bayside in downtown Miami – we decided that the marketplace was far too tourista for our tastes, with strip and shopping malls identical to those found anywhere in the US. Restaurants such as Hard Rock Cafe, Bubba Gump and block after block of Starbucks was not the experience we were craving. We can see corporate conglomerate America anywhere. Instead, we wanted to see culture, something unique….we wanted to experience Cuban Miami. We wanted to see and smell the cigar factories, the cuban food, the lifestyle. I wanted to be immersed in Spanish….no English. Bayside – would not do. It is modeled after American culture. We had to visit Little Havana – the authentic Cuban neighborhood in Miami Florida.
What better way to experience Little Havana – than to ride our bicycles to this slice of Cuban culture? It was time to brush up on my Spanish. Hola mi amigos! I had a few phrases memorized, and can distinguish between a dog (un perro) and a car (un carro), and can count from one (uno) to 10 (diez) in espanol. This will have to do for our adventure into Little Havana.
From our marina – the bicycle ride to Little Havana was less than 4 miles each way. We joined up with Catamaran travel mates senor Rick and seniorita Linda for a much anticipated cuban culinary experience. A “local” had recommended Versailles for the best Cuban food, and online reviews were favorable for La Carreta. Both restaurants are located in the same block on 8th Street at 37th Avenue. We could decide once we arrived.
We opted to eat at Versailles. The menu was in English. The food was good, but I had to wonder, with an english menu – was this really authentic Cuban food? The menu has been modified for the gringos….has the food been americanized as well?
Perhaps the scenes of electrified Cubans in the streets, cuban music everywhere and Cuban owned establishments from the days of Elian Gonzales were too vivid in my mind. As we rode our bicycles along block after block of pawn shops, car dealerships and convenience stores – the only difference was the writing on the billboards. Here, the words are in spanish. One car dealership was roasting a pig in the parking lot and blasting cuban music from a boombox. This may have to count as my most memorable cuban experience in Little Havana….gone Americana.
To experience Havana (La Habana), an adventure to Cuba may be required. hmmm….how to get there?