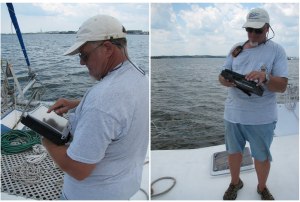 As we departed from the Docks of Anchorage Marina with our big blue tarp draped over the windowless portals of the salon – the skies and waterways were a buzz with police copters and inflatable dinghies. Sure enough a B’more body was missing – and a massive search was underway in the harbor.

As we neared one of the police boats – I asked how the body search was coming. I don’t think this policeman had particularly high expectations of finding anyone – and joked with us to keep on a lookout for a floating body. I assured him there were no bodies hiding under our massive blue tarp. Yep, another day on the water in the Baltimore harbor.

As we rounded Fort McHenry – and far away from the body search – it was time to test handHELM(tm). After months of beta testing on the dock – we had to see if she could actually steer the boat. We were en route to TideWater Marina – just a few miles away – to have the new salon hatches installed. We looked like a boat that was badly in need of re-construction. With our blue tarp flapping wildly in the wind, it was a perfect opportunity to use handHELM(tm) to steer the boat from the bow. After all, with the blue tarp limiting visibility from the helm station – this is what handHELM(tm) is all about! Moving around the boat, without wires – and steering the boat from any location.

With the auto helm ON, Captain Pat, standing on the foredeck – easily navigated Cat Maudy using handHELM(tm). A course correction to starboard…or another course correction to port – Cat Maudy was under power by handHELM(tm). Just like toggling the autohelm from the captain’s station — it was pretty cool being able to steer the boat from any location on the deck. Depth, wind speed and other instrumentation could be viewed too. handHELM’s sea trial is a success! Stay tuned for the next sea trial…on a Blackberry!