Officer? Was I really bicycling too fast??? 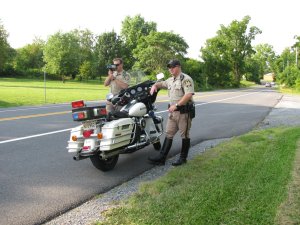 That would be a big negatory, ma’am.

40 miles on country roads somewhere northwest of DC, with Joel and his biker buds Tom and Bob made for a perfect Friday afternoon rush hour – on bicycles. Secluded country roads, mostly car-free allowed me to do my job at being the group “bike anchor”. I had hoped that my pokey speeds had to do with my low-end bicycle cheap gears and the like, but Tom confirmed that theory. Nope, it wasn’t the bike at all. My sluggish speeds were due to inefficient bicycling. It was a man up moment. Time to analyze bike bio mechanics.

I spent much of the ride studying biking technique, and gleaning tips from everyone. Lower profile on downhills…attack the hills….maintain RPMs…no, make that Faster RPMs…use those pedal clips more efficient..weight off the arms….something about the circle…YIKES! So many details.

I have a lot to learn and practice — before the rush hour cops with their speed guns take notice!