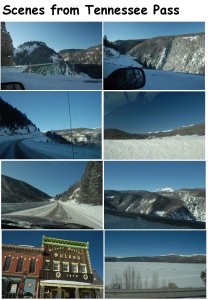 It was time to descend from the stunning views of Colorado Rocky Mountain peaks, and beam ourselves back down to earth. Rather than travel the Interstates, we decided to take the back roads less traveled, southward to Albuquerque, NM – approximately 400 miles from Vail.

The skies were clear, and the temperature was a balmy 4 degrees at 8100′ in base camp Vail. The locals had provided some conflicting advice regarding the route we had planned – as to its speed and drivability. If the road thru the two mountain passes became too treacherous, then the pass would be closed – and we would have to turn back. We decided to take our chances.

The first 40 miles, along Route 24, just south of Vail, was both breathtaking and a bit scary at the same time. The first mountain pass we would cross is called the Tennessee Pass – where we slowly ascended along a series of switchbacks, on snow and ice covered roads to an elevation of 10,424. Along the side of the road was at max 3 feet of clearance. Beyond that – was a cliff. One unfocused moment or slip of the tires, and it would be “mayday”.

Near the summit, at the Continental Divide….where East meets West….was a bridge allowing us to connect to the next mountain. How could this bridge get constructed – with a 2000 foot drop below? It’s best not to wonder these things, especially in thin air. We then descended, along a series of switchbacks …only to repeat the climb once more….and finally return lower to unbelievable views of peaks over 14,000 feet to our west – into the mountain top town of Leadville (10,000′ elevation). It takes a special kind of person to live in the town of Leadville – one that moves very slowly thru life. 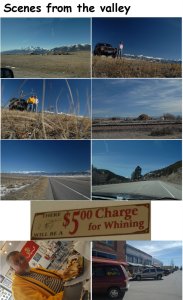 South of Leadville, CO, the mountains strangely “part”….as if you are in a high elevation valley (8000′ feet) – with mountain ranges within a few miles east and west. The road straightened out, and it was delightfully void of any traffic or snow. Of course it was devoid of any services too (such as a gas station, or rest stop, or yikes – what if the car broke down?) – but having the valley and views to ourselves was pretty special.

Our final mountain pass – (Poncha Pass) was just west of Salida CO – with a peak of just over 9000′. After this pass, we remained in a range of 7-9000 feet elevation, and the valley began to look like a high elevation desert, with the mountain ranges gradually moving further apart. Sights included, the Arizona River, Trading posts and some thin-air ponies and cattle. We decided to break for lunch in a small mountain town called Monte Vista. The buildings along the two main streets appeared to be constructed in the mid 1800’s. We tied up our pony (i.e. Jeep Cherokee) at the Johnny B. Good Café, and was served lunch by a native American Indian waitress. We felt genuinely “cowboy” in this little town – approximately 50 miles north of the New Mexico border.

At the NM border, it was time for my hoola moment. The “welcome to New Mexico” consisted of a sign, and a pull over. No frills at this stop — but the sign and topography were the perfect backdrop for hoola-mania in state # 10. 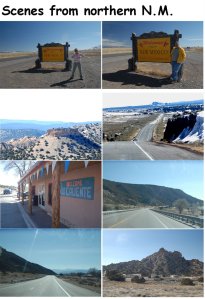 I’m glad we decided to fill up the gas tank at any location that had a working gas pump…because you could easily go 150 miles without seeing one shred of civilization. One car every 10 or 15 minutes…maybe. As we descended into northern New Mexico along US Route 285 – we were greeted with rolling foothills, often devoid of any vegetation. The topography was amazing and constantly changing – yet we were still at 7000+ feet.

Pueblo homes in natural clay colors began appearing 50 miles north of Santa Fe, and it was at this point we decided it was time to buy a map. The roads were not always marked with a route number, and we had already made a few wrong turns. Hmmm. It appears that Albuquerque is a bit out of our way. Maybe we really didn’t need to visit Albuquerque after all? Time for a new plan. We would continue heading east – along 285 – until we reached I-40.

Off in the distance, the mountain peaks were growing larger again. The tallest peaks were snow covered, and I guessed they were in the range of 14,000 + elevation. Within 30 minutes, they had disappeared for good. We passed thru Sante Fe, and numerous Indian Reservations…and the landscape took on the characteristics of parched grassy plains. There was a noticeable absence of water or any tall vegetation.

By 6PM we quit driving for the day at quaint desert oasis of Santa Rosa, NM – elevation 4600′. The oxygen was both plentiful and delicious. After checking into our hotel, we walked to the Silver Moon Café – located on historic Route 66. It was authentic “southwest” décor, the food was fantastic, and the people were very friendly. I’m diggin’ Santa Rosa NM.