6/6/42
Dear Helen & Wilson:
The weather up hear along the lake is very damp. When the sun does come out, its like being in the tropics. We can’t wear our summer uniforms until July 1st.

Most of the gang that I came up with have been shipped out. Most of them went south as they were instructed to keep their summer uniforms handy. Some were shipped clean to the Air Corps in Miami. There are about 50 guys in the barracks I am in. Beds are emptied during the day by fellows being shipped out, and at night they are filled by new men coming in. They really have some system in this army. We get up every morning shortly after 5:00. Have breakfast about 5:45 to 6:15. We get our orders for the day at 7:00. But right now I don’t get the local orders as I am on the “Held for Duty” list. Headquarters is giving me a little clerical training before sending me away. At least that’s what I think.

One morning our barracks was late in getting up and we had to perform all the duties around our section. You can imagine what that means.

They have a nice little theatre on the grounds. 20 cents to see a picture. But, I haven’t taken in any as yet.

This place, if I haven’t told you before, is about 14 miles from Niagara and about 35 or 40 miles from Buffalo.

I haven’t had my shots yet, but down at headquarters today one of the fellows made arrangements and I will probably get them Monday. After I get them, I might be able to get a furlough.

The Curtis-Wright and Bell Aircraft Factories are not far from here. I never saw as many airplanes before as I saw on the grounds outside Buffalo. They test them over the camp here and shoot at targets out on the lake. Those cannons make quite a racket when they go off. They zoom around here and make you duck sometimes. That’s all for now, 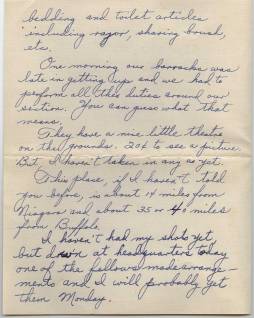 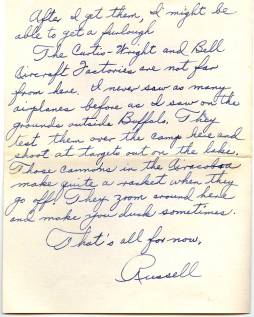