Guess it’s about time I utilized this writing paper to drop you a line. Right now I have a grandstand seat on a huge crap game. Sure it’s payday. Tomorrow some of the boys will be broke until payday again.

But there isn’t very much new. You’ve probably got the same kind of weather as we have up until now. Right now the ground is covered lightly with snow and the wind is really howling outside, so maybe winter is here.

I saw a picture today at the movies that was really something. It was called the “lifeline”. It dealt with the treatment given wounded soldiers from the battlefront to the general hospitals. In fact, the highlight of the thing showed them cutting off a leg. Gruesome!!!!

I’ve seen quite a few movies in the last couple of weeks and among them were “Song of Russia”, “The Desert Song” and the funniest was “The Miracle of Morgan’s Creek” which starred Betty Hutton and Eddie Bracken. By all means try and see the last one if you want to see something funny. The others are good too.

Tell Willard and Grace I’ll drop them a line in a couple of days; then you can all swap stories. With that I close. 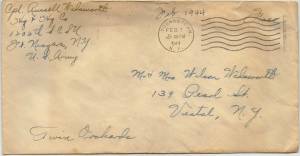