The California clock shows 5:30AM and coffee shops in our Russian Hill vicinity don’t wake until 7:30am so we tapped our watches as if speeding time along, wondering how we would survive this delayed awakening.   But we did and departed our hotel (the neighboring-room ‘domestic’ situation sleeps) 7:30AM local time pronto.  First stop an Italian espresso that did the necessary magic and off we were on a steady descent down Columbus Street heading toward Fisherman’s Wharf.

Walking with a backward lean made it apparent we were descending from an unusually steep mountain.  We posed at each intersection photo-bombing ourselves into side streets that rose to the clouds or dropped to the sea, all the time marveling at the cyclist commuters taking on the uphill challenge barely sweating.  No doubt San Francisco cyclists are equipped with twin-engine quads and an extra set of lungs.

Reaching the Wharf, a fog formed around the Golden Gate Bridge and Alcatraz Island so we wandered along the piers, took in the sights of boats at dock, fisherman, a few World War II ships, and then we followed the aroma to Boudin Sourdough where fresh baked breads and Peet’s Coffee awaited.   Inside Boudin’s was a map of favorite tourist attractions so we picked 3, and off we went exploring.

First stop, Pier 39 to see the Sea Lions.  You know you are closing in on these creatures due to:
(a) sounds that are a cross between  honking and barking and
(b) the pungent aromas of eew’ d’natural from the depths of the sea.

Hundreds of sea lions have taken over the docks of what was once designed for a marina.  Each floating dock has some combination of 6-8 male and female sea lions, with the males taking the lead on being the troublemakers.  They pick a fight with another male and body slam their opponent adding honk-barking for added insult until one of the males falls overboard into the bay.   The winner, feeling mighty-mighty looks over to the females seeking approval, but the girls are busy sleeping and maybe one looks on casually with an open eye and a ‘that’s nice, dear’ before returning to her beauty rest, and clearly the winner did not get the attention he deserved.  So, he now picks on one of the sleeping females, body slamming her til she falls overboard too, and now the rest of the females have had enough so they all begin honk-barking, and finally the male is satisfied having gotten everyone’s attention.  I could add a few comments here —  life parallels if you will —  but enough said.

Next stop, Ghirardelli’s.   We walked over to Ghirardelli Square and I had visions that my name was  Willy Wonka with sweet cocoa dust lining my yellow-brick-road, but for some reason, I either could not locate the chocolate tour, or I had missed the chocolate tour, or I just landing in the most wonderful chocolate store with chocolate in the air and the whole tour seemed unnecessary.   I couldn’t imagine a better place to live, everything smelled of cocoa and sugar and sea salt and caramel and I thought of never leaving, but I did, with a bag full of goodies and confident I owned one of Wonka’s 5 golden tickets. 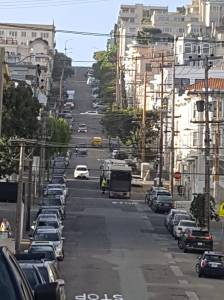 Third stop, The Cable Cars. Why not experience the steep climbs and descents of San Francisco’s streets on an old-fashioned cable car?  We watched the cars leave the Wharf for an uphill battle along Hyde Street, and were confident that a single trip would not do.  We purchased the Day Pass and what we didn’t realize, was the San Francisco Municipal drivers (bus and trolley) were doing battle with the City Officials and were operating in slooooooow motion.  We waited in a long line watching  few people occasionally board and just when it seemed like the Muni operators had all gone on a lunch break, one of the many waiting cable cars moved along giving all of us hope.

Not knowing the politics that were in play, gradually impatience made a  move, but with a bag full of chocolate there was really no hurry and eventually it was our turn to board the cable car. Like true touristas, we oooh’d and aaah’d as the car climbed up the steep San Francisco city streets, and watched the smoke from the brakes keeping the car from free fall.   The ride was all of 30 minutes, and we still had a bag of chocolates so once we reached our destination, we got off, stepped back in line for another hour wait to ride that cable car back to the Wharf. 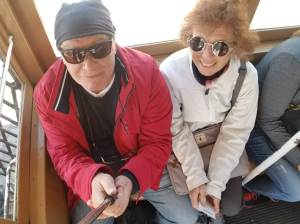 Returning to the Wharf, we paused to watch swimmers test their skills on the bay undaunted by the robust current, watched the area explode with humans as more tourists arrived, and found our way to lunch.  Apparently we needed one more cable car ride before the day could be over, so this time waited in line for 1.5 hours.   We ended our day in the ‘Fran mesmerized by a city with spectacular views,  intoxicating chocolate and a day pass of cable-car travels — that despite a union-slowdown is worth the wait.