Downtime in Deltaville VA, and northbound to Solomons MD 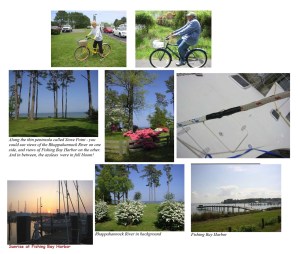 We couldn’t have picked a better spot to have some down-time, while waiting for southerly winds. I can’t say this with any certainty, but Deltaville appeared to be the kind of place, where everyone knew everyone else in town. You could leave your car unlocked with the keys inside, and no need to lock your house door at night either. If you needed a cup of sugar to bake a homemade pie, you could always ask your neighbor for a little sugar to spare – and share some of that pie as well. This is the kind of town I imagined Deltaville VA to be.

We decided to make good use of our time in Deltaville – by first visiting the local attractions (West Marine) and make necessary boat repairs. As small as a town that Deltaville is (just a little dot on the map), it was overflowing with marina specialty stores to service the boat industry.

The boat projects that required the most immediate attention include:
1. Replace topping lift line (140 feet of new rope — ouch $$$)
2. Sew up Sail pack
3. Replace 3 reef line blocks on main sheet
4. Re-install all electronics at the top of the mast (anemometer, VHF, windlass & tri-color light) that had to be removed prior to the inter-coastal portion of our trip

With the local West Marine just under 2 miles from our dockage, we determined the best way to get there – was to use two bicycles, courtesy of the Fishing Bay Marina. Fitting perfectly with my view of Deltaville, these were delightfully vintage bicycles — single gear, white-walled tires, pedal backwards to brake, plus a huge basket attached to the handlebars — and proved to be the ideal mode of transportation. I’m not sure if it is “normal behavior” in Deltaville, but EVERYONE we passed (on car or on foot) waved to us. Very friendly town (plus we looked pretty snazzy cruising along on these bikes)!

After a costly trip to the West Marine store, and a trip to the local grocery store (i.e. 7-11!) — we rode back to the Fishing Bay Marina to get started on our projects. By Wednesday, the storm weather had subsided, and the winds had settled down enough to allow Pat to be hoisted to the top of the mast – to reinstall the electronics. We completed the remaining projects on our “Deltaville To Do” list….and decided to take in more Deltaville sights — this time, without spending dollars on boat projects.

We hopped back onto the courtesy bikes with the big white-walled tires, and took a spin out to Stove Point – the tip of the peninsula that borders Fishing Bay Harbor on one side, and the mouth of the Rappahannock River on the other. The residents on Stove Point – have obviously had problems with “trespassers” — as there were 3 huge signs warning us to “GO BACK NOW”…”PRIVATE PROPERTY”. How silly. We ignored all of these signs, and continued peddling our bicycle classics along this beautiful peninsula. I had scenery to absorb, and pictures on my mind – and a few little No Trespassing signs would not stop me. I’m guessing the residents on the Stove Point peninsula are not native Deltaville folks — as they haven’t quite gotten into swing of the otherwise friendly local flavor.

In any event, it proved to be well worth the cycling adventure out onto this private peninsula — as the views from the shoreline were magnificent (from a land owner perspective) — and if you had to live on land — then this would be the spot.

Weather predictions called for a brief period of VERY LIGHT northwest winds…changing to VERY LIGHT southerly winds. We decided it was time to try to motor sail to Solomons Island MD. For some reason, we continue to believe the weather forecasts (and yes we compare about 5-6 different sources too!). I guess we figure just ONCE it will be right. 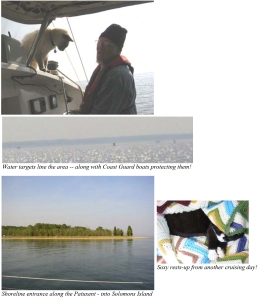 We departed Fishing Bay Harbor with patchy fog chasing us out into the Rhapphannock River. Fortunately we were traveling a few knots faster than the fog — and we reached the Bay without losing any visibility. Once on the Chesapeake — we hoisted the main sail, and unfurled the jib. The winds were light from the northwest – and with our tack, we got about ½ knot boost from the sails to help with speed. So far, the weather predictions were right on target.

Steering was by far our biggest challenge. With use of only the port rudder for steering the boat — it was very difficult to hold a course. We experimented by hoisting the starboard rudder completely out of the water – and securing in an upright position to the stern cleat. Not sure that this really made any difference, but we convinced ourselves that steering was a tad improved. Amazing what the mind will believe if you tell it so!

In any event, we were constantly veering off course 10 degrees to starboard, then 10 degrees back to port to correct. Cat Maudy wanted desperately to come to starboard — and we had to hold her back. The light winds eventually became “no” winds – so we furled in the jib…and motored past the mouth of the Potomac River.

Somewhere in the middle of the Chesapeake Bay — across from Point Lookout the winds picked up. Yep, they picked up all right — to 20 knots from the north. Not the south…and not light winds…but instead 20 knots strong from the north hitting us head on. The waves were building, and once again, the weather weasels got it wrong. Oh well – time for a new plan.

We motored closer to the western shore to see if we could escape some of the larger wave action. Much to our surprise – the seas were far gentler along the western shoreline – even though the winds appeared to be gaining strength. I looked at the topography – and it appeared between the northern mouth of the Potomac, and the mouth of the next river north (the Patuxent) – the angle of the shoreline protected us from the brunt of the wave action. If we ventured back OUT toward the middle of the Chesapeake — we would lose some of this land protection from northerly winds – and the waves would be bigger. This is a no-brainer. We’re staying close to shore!

That is, until the Coast Guard boats came chasing after us. It appears, that the nice protection close to shore, put us into a military “TARGET RANGE” (no trespassing zone) – and within 20 minutes the TARGET area would be surrounded by fighter jets who would be shooting at targets in the water. Come on guys….give a first matie a break here? Do you really need to shoot at the water right now? Can’t you see there’s a lot more wave action out in the middle of the bay?

Water targets line the area — along with Coast Guard boats protecting them! So, we had to change course again — and head back out to the middle of the Chesapeake — to avoid being a TARGET …in the TARGET ZONE…of the US Navy. Having survived being a pleasure boat target for some TOP GUN fighter jets further south on the Alligator River (in North Carolina) – I didn’t want to mess with a possible encounter. However, I would be ready this time — for the air show. Despite entering back into bigger waves, I was looking forward to our front row seats for the shoot-out at the OK-Corral on the Chesapeake Bay. “Maybe I should make some popcorn?” I suggested to Pat. We motored on in our new course farther out in the Bay….and kept a watchful eye for the upcoming air show. 30 minutes passed….45 minutes….an hour…and by now – we had motored far enough beyond the target range that we no longer had front row seats. The US Navy vs water target battle never happened. I guess they just didn’t want us around.

By 6PM, the STRONG 20+ knot northerly winds…had subsided to nil. We were motoring up the Patuxent River — some familiar territory — for anchorage at Solomons Island. Cat Maudy would be spending her first night in Maryland since November 2007.