Charleston to Georgetown offshore…we have no steering! 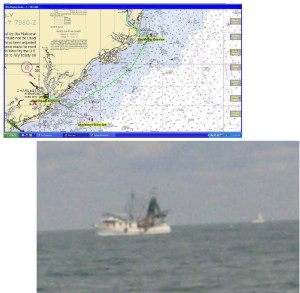 Sunday, April 6 — up at 5am to analyze weather information from about 5 different sources. It appears winds are light – they start south-westerly – and we may get 10-15knots of wind offshore. We decide to gamble…and see how the weather REALLY is offshore. We can decide to go back to Charleston if it is unfavorable.

The ocean swells are much larger than I remember on my prior 2 offshore outings. I am estimating 4-5 feet. Probably due to the last 2 days being VERY windy….As we headed out of the Charleston Harbor along the jetty’s — we took the swells head on. A bit bumpy…but not a show stopper….so we kept going out. About 7 miles offshore, it appeared that the winds were very light. We might be able to motor-sail to Georgetown – but sailing without the engines was out.

I am ready to depart Charleston. I voted to just GO on to Georgetown at this point. It didn’t matter to me if we motored, or motor-sailed or sailed. At least we could start making SOME progress in heading north toward Baltimore. It was time to move on. The next weather window wouldn’t be until Thursday or Friday. It was 77 miles from our anchorage in Charleston…to Georgetown SC – a full day of motor sailing was in store for us. Pat had our route plotted on the “Captain” software — it’s the little green path from the Charleston Harbor into Winyah Bay — and up to Georgetown.

It turned out to be a really beautiful day– tho devoid of wind for sailing. We did hoist the main, and had the jib out for awhile…but eventually furled in the jib as it was just luffing.

Everything seemed pretty uneventful. I saw dolphins and even a sea turtle. Riding the swells became rhythmic. There was one other northbound sailing vessel within our vision, a couple of power boats….and a shrimp boat.

As we passed by the shoals off of Cape Romain, a line of breakers became visible. It is kind of strange to see the water breaking so far offshore — but our routing software steered us clear of that shoal. Pat headed up into the wind to allow me to take down the main — as the main sail was no longer effective.

While I was busy bringing down the main sail, Pat was busy stressing back at the helm. He said he had lost steering. He turned the boat into an acute circle. And then appeared to have regained steering. Or so we thought. Maybe it was rip currents around Cape Romain that caused the sensation of losing steerage? In any event, we changed to more of a port tack to begin the final 13 mile leg toward the entrance of Winyah Bay. We seemed to have lost speed on this tack…maybe the winds changed? Maybe currents? Maybe the way the swells are moving the boat? I wasn’t too concerned.

As we approached the Winyah Bay shipping channel — we would be navigating thru a tricky entrance. The shipping channel was quite narrow PLUS it was surrounded by underwater jetty’s….so you really cannot veer off course. Tides, currents and wave action would make this a bit of a challenge. It was time to change directions with a 90 turn to port in order to enter the channel. I was inside the salon calling out the headings….when I realized that something was wrong. Pat was at the helm turning the wheel frantically. “We have no steering” he yelled out….as he attempted to point the boat back out to open water (as opposed to entering the shipping channel).

Strangely we could ‘kind of’ point in a starboard direction….but the boat just really wanted to go in circles. Things were happening fast now. I am at the helm…attempting to hold a position with a boat that has lost it’s steering….and trying to avoid breakers and jetty’s…while Pat is attempting to troubleshoot the steering problem. Weeee-doggie! My body parts were quivering….but there was no time or place for panic…Pat races inside…and comes out with a wrench and a string. He is tying a string to the wrench so that he doesn’t loose the tool. I’m sensing that Pat is about to get into a very compromising position (like hanging off the end of the boat)….so I put on my “Safety Director” hat.

“You’ve GOT to tie on to this boat” I emphasized. From my world….if he is not tethered onto the boat…and fell off…there is NO WAY I could retrieve him without steerage. Don’t want to think about this….back to more positive thoughts.I was trying to watch the swells & point the boat as best as possible….watch the GPS….and keep my 3rd eye on Pat. Yeah. OK now.I could really only head to starboard. Pat is now lying on his belly at the stern of the boat….trying to diagnose the steering problem. He gets up and races back into the cockpit again. “I think I’ve discovered the steering problem…and I think I can fix it.” Words of joy to my ears. He gets another tool….and goes back to the stern.

“Tie onto the BOAT” I stressed again… Pat goes back and dangles off the stern of the boat again….and I slow the engines so that the swells don’t bang us around quite so much. Suddenly, the steering felt like it had come back. Pat had me do a few test circles…hard turn to port…followed by a hard turn to starboard. The boat responded. Wow…Pat did it…he is downright heroic in my book.

It turned out that the RAM (the rod that is controlled by the steering hydraulics) came loose from the port rudder — and had to be reconnected. With the RAM being loose — it was not receiving any hydraulic fluid — and thus the rudder was pointed outward — causing us to go in circles if we attempted a port tack…and slowness on a starboard tack.

What was MORE amazing — is that the NUT (an itsy bitsy NUT) was just sitting on top of the rudder — not connected to anything. How this little NUT could just sit there during all this wave / ocean action is pretty bizarre. Kind of like leaving your wallet on the hood of your car….and driving from Maine to Florida ….and your wallet is still there when you arrive in Florida. Just about that level of miracle.

Our navigation software (The Captain) — among many other things, displays your boat path. The image of our boat path — should follow the journey legs between each way point. I.e. the green line that represents the path of the boat should be a series of straight lines. As you can see from the image captured by our navigation software — things got a bit crazy just as we were about to enter the shipping channel. A series of small circles (squiggles)….and then a long circular tour back out into the ocean — shows our route as Pat (aka “hero of the day”) restored our steering.

Sooo, I returned to the nav station – and called out headings…while Pat navigated us back into the shipping channel. Entering Winyah Bay — the waters became calm, and we followed the buoys up to Georgetown — and got a slip at the Harborwalk Marina. Harborwalk is a tiny marina – a one man show type of place. We were thrilled to be in safe harbor.