PAC Man with the Tram golfers

Today we would try to make it thru a total of 10 bridges — six of them fixed height 65′ bridges. If we’re lucky, we’ll finish the day in Georgetown SC – with only 60+- miles til Charleston. Shortly after leaving the Myrtle Beach Yacht Club we were upon our first fixed bridge for the day, followed immediately by a swing bridge that fortunately opens “on demand” (i.e. you don’t have to wait for an “on the hour” opening)

In about 10 miles, we would be upon a series of 4 fixed bridges, a 67′ cable tram and multiple swing bridges. Wow. Busy morning. As we would approach each fixed bridge, Derrick would take the binoculars and try to find the “measuring stick”. The measuring stick would tell us how high or low the tide was in relation to the height of the bridge.

Here’s what I’ve learned in my 2 days on the ICW. Some bridges have a dysfunctional measuring stick (i.e. it tells you you’ve got 68′ clearance — but it’s really more like 64′)….other bridges seem to have a well calibrated measuring stick (65′ = 65′)…and yet others want you to just play Russian roulette – i.e. no measuring stick. The bridges we came under today were either well calibrated…or of the Russian roulette vintage. Here’s the routine. Once a measuring stick was sighted, I would lay on my back in the forward most portion of the hulls – staring up at the mast…as Captain Pat sloooooooooowly maneuvered the mast to a position just before the bridge. I would then have to decide if we thought there was enuf clearance for the boat to continue forward. Technically, you should see the mast…and not the bridge…and then you know you are clear. Pat is back at the helm…sweating bullets….until he hears the “all clear”.

What about the 67′ cable tram. It’s a tram alright. What is the tram for? Well of course – it’s for sending golfers in Myrtle Beach from the east side of the golf course on the intercoastal – to the west side of the golf course. Now, when these trams go across the intercoastal, the tram cars drop FAR BELOW the 67′ cable….so, it’s like a PAC MAN video game for sailors with tall masts – trying to miss (or take out) the trams. The task is to get beyond the tram cars without taking them out with your mast. Seems like a bit of a design flaw by the Army Corp of Engineers….but hey, not nearly as bad as the New Orleans levee system. I digress.

Government Secrets:Forget everything you are about to read and see. It’s just an illusion.This is a ‘beam me up Scotty moment’. I was surprised that the picture even came out — fully expecting it to be automatically erased by ET (the Extra Terrestrial). But, here it is — just beyond Myrtle Beach proper and the golf courses — the Starship Enterprise.

* South of Myrtle Beach, cookie cutter homes and more lawn ornaments, we entered the
* Waccamaw River – which snakes thru 30+ miles of untouched swampland.
* Scenes from the Waccamaw
* And a huge tsunami wake from this Coast Guard ship 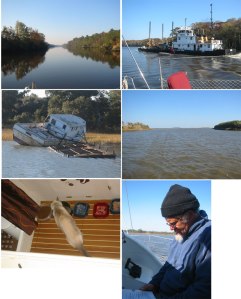 Within 5 miles of our final fixed bridge of the day, we realized that it would be precisely highest of HIGH tide at the time of our attempted passage. Hmmm….a bit risky. Considering our very limited clearance at low tide….we decided against trying to make it to Georgetown (just on the other side of the bridge) – and ended up anchoring on the north side of a small island on the Waccamaw.

For some reason, Earl is going ‘south again. Not sure what is going on with my little buddy – but he won’t eat…and barely moves. I’m forcing him to take some juice from a can of soup by putting it on his gums – and then he has to lick his gums and the soup juice on them. Don’t know what else to do. He keeps sneezing so I’m hoping it’s a virus that he can eventually beat. The vet said his vitals were normal. Stay with me Earl buddy.